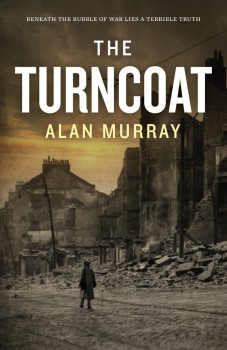 The search for a spy in the Glasgow suburb of Clydebank during WWII becomes all the more urgent when Hitler’s second-in-command arrives seeking to contact Nazi sympathisers in the British establishment.

The accuracy of Luftwaffe targeting over a second consecutive night of bombing of wartime Clydebank suggests local assistance, and Military Intelligence officers Major George Maclean and Sergeant Danny Inglis are tasked with finding the culprit. A report of an Irishman asking questions gives them a trail to follow, but when the informant is killed it begins to look like someone in their organisation is tipping off the opposition.

Events take on a wider dimension when a German plane lands near Glasgow, piloted by Rudolf Hess, Hitler’s deputy. He claims to know important people in business and government in Britain, and asserts that he is on a mission to unite the two countries. His reliance on advice from his astrologer gives rise to some doubts of his sanity, but given his prominence in the Nazi hierarchy, careful handling is called for.

Under instructions from London, Hess is moved to the country estate of Altskeith while the debriefing continues. However, German agents have been informed, and instructed to kill Hess. They are ruthless and well-equipped, and with someone on the inside have a fair chance of success.

This is a novel built upon a foundation of fact. As most readers will be aware, Hess survived the war, a sad figure incarcerated in Berlin’s Spandau prison from 1947 until his death in 1987. Still controversial is his belief that senior figures in the British establishment were sympathetic to Nazi thinking, and that these figures were powerful enough to engineer a rapprochement with Germany. According to the author, allegations surfaced in 2012 that Hess had been murdered by British agents to prevent the release of details about an alleged 1941 plot to overthrow Churchill.

The above aspects of the Hess story serve only as background to the book, which has at its focus the struggle against the turncoat and the German agents on the spot. The first half of the novel depicts Clydebank, a grim prospect after an extended period of industrial depression followed by devastating bombing, and follows the activities of both Maclean and Inglis, and of the agents they are chasing.

After Hess’s arrival, the protagonists are re-assigned: Hess finds Maclean sympathetic by virtue of his experience in Germany as a student, and insists on his retention as liaison. Their foes are also re-directed, on urgent instructions from Berlin. The parties are therefore lined up for a violent confrontation before all is explained in the presence of a very senior figure in the final pages.

This is no doubt a dramatic episode in British history, a time of desperate resistance to a bestial foe. The author rather underplays the tension which must have been felt by those close to events, or perhaps this is just the sort of sang-froid you might expect from the British. Either way, it’s a rattling good tale.