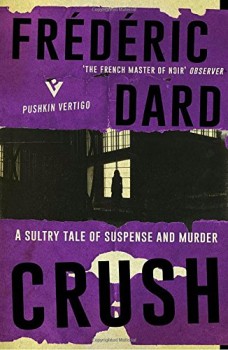 In a dull grey town outside Paris, a teenage girl becomes obsessed with a glamorous American who offers the dream of a more exciting future.

Originally published in 1959, this is one of hundreds of thrillers written by Frédéric Dard, a limited number of which are now being re-issued in translation. Crush is very impressive; while it bears the traces of its vintage, the author’s skilful build-up of suspense and gradual revelation of morbid obsession will never date.

Seventeen-year-old Louise Lacroix is desperate to escape the dreary life she leads with her mother and step-father in unattractive and provincial Leopoldville, where the smell of rotting cabbages is a persistent feature. Enough is said to make one sympathise with Louise’s despair with her little town, bringing to mind Paul Simon’s comments on his: ‘where all of the colours are black/it’s not that the colours aren’t there/it’s just the imagination they lack.’

Louise is taking a route home from work through a wealthy part of town which offers glimpses of a better life, and is captivated by Americans Jess and Thelma Rooland. Their house, their car, their dress and behaviour evoke the sophistication to which she aspires. Upset after an argument at home, she is bold enough to present herself to the Roolands and offer her services as a maid, and to her delight is accepted. The couple have plenty of space and Louise persuades them to let her live in.

The arrangement seems to work well, at least at first: Thelma is idle and Louise makes herself useful cooking and cleaning. However, Louise’s story, told in the first person throughout, shows that she is infatuated with Jess, who alone can make her dreams a reality. Empathy with Louise’s plight and the initial impression of her as a victim become quickly undermined when she reveals both her passion for Jess, and the simplicity and self-absorption which leads her to think she is likely to be a suitable replacement for Thelma.

Initially it looks as if Louise will be disappointed, but for an apparently naive girl Louise has a strong will, and Jess and Thelma’s ideal life conceals weaknesses and significant problems. Thelma is an alcoholic and Louise believes that she herself would make a better wife. Things come to a head after a car crash in which both Jess and Thelma are injured. Louise makes some assumptions on which she is prepared to act, with dramatic consequences.

Dard is said to have been influenced by Georges Simenon, but Crush is perhaps more reminiscent of Patricia Highsmith, whose characters also frequently had strange compulsions. Much about the American couple seems a little off, and it is understandable as well as fortunate therefore that the focus should be on Louise, where Dard’s touch is entirely unerring. This domestic tale has a distinct chill towards the end, and a final twist that delivers an ice-cube down your back.