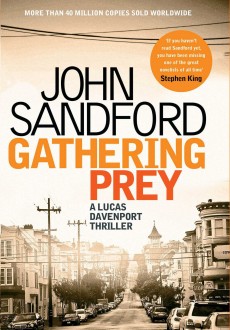 Lucas Davenport gets a call for help via his daughter Letty from a traveller whose friend has gone missing. What he uncovers takes him on a wild ride across northern central USA.

For those who have yet to meet the man from one of his 26 previous outings, Lucas Davenport is an investigator with the Bureau of Criminal Apprehension in Minneapolis/St Paul. A new case comes his way through his adopted daughter Letty, who relays a cry for help from Skye, a traveller whose friend Henry has gone missing. Skye thinks that Henry has fallen into the clutches of a man known as Pilot, and according to rumour, killed.

Skye tells him that Pilot is the head of the ‘disciples’, some 20 men and women who have an evil reputation for rape and murder. The group move amongst travellers, young people on the move alone or in small numbers, making them easy prey. Davenport is saddled with an unhelpful bureaucrat, Sands, for a boss, but has a good deal of independence, and recognising the need for action gets going without waiting for approval.

Left alone, Skye takes off for the next event where Pilot is likely to appear – a Juggalo (Followers of the Insane Clown Posse) gathering in Wisconsin. Davenport gets confirmation that Henry has indeed been killed, and makes arrangements for an interception. Unfortunately, Letty is also determined to be involved and gets there first, putting herself in real danger.

Pilot, or more properly Pilate, evades arrest and in a series of operations is thereafter tracked across a number of states to the Michigan Upper Peninsula, a sparsely populated area. Davenport works with small local police forces, getting always closer but with his quarry becoming ever more desperate. The action is non-stop, and a violent confrontation looks inevitable.

As usual with Sandford, the book is a joy to read. Davenport carries no burden of angst, he made a small fortune from software so is financially independent, and has a supportive family: his surgeon wife, Weather, adopted daughter Letty as well as a couple of other children. He loves his job, and loves the banter with his colleagues; the dialogue is full of wit.

In this book his liaison with small sheriffs’ departments in hick towns is great; he gives them the primacy to which they are entitled, and they grant him the respect due to his experience and reputation. I really doubt whether reality could ever match this: the story of Steven Amery shows what you would really be up against in the wilds of Wisconsin (and doubtless in other states too). But this is how things should work, if only law enforcement personnel were a bit smarter and a little less narrow-minded.