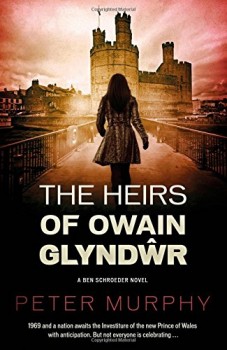 The Heirs of Owain Glyndŵr

A group of Welsh activists are on trial for plotting to plant a bomb in Caernarfon Castle during the investiture of the Prince of Wales in 1969.

On the eve of the investiture of the Prince of Wales in July 1969, Arianwen Hughes is arrested driving with a home-made bomb near Caernarfon Castle. It is barrister Ben Schroeder’s brief to defend her at the trial held at the Old Bailey. Implicated in the foiled plot to detonate the bomb during the ceremony are her husband, brother and a family friend.

This is the fourth in Peter Murphy’s series of legal thrillers featuring Ben Schroeder. It begins with the opening day of the court case then returns to how the group first met then follows their story until their arrest. Most of the book is taken up with the actual trial and at first glance this could seem to be a daunting read with court case minutia, but it is totally engrossing thanks to the storytelling skill of the author. It is all carefully researched from the investiture procedures, the 1970s court proceedings and life in chambers. As a qualified lawyer this is where Murphy’s knowledge comes into its own.

The story illustrates and discusses effectively questions of nationalism and national identity particularly the Welsh language with what is seen by the would-be bombers as English interference in Welsh affairs and culture.

As a featured character Schroeder is low-key, clever and determined, but it is Arianwen and the others who hold most interest in this case. It is to the author’s credit that this fiction sometimes reads and feels like a dramatic re-telling of a real event. There is a good plot twist, but you will probably have worked it out before the book leads you there.