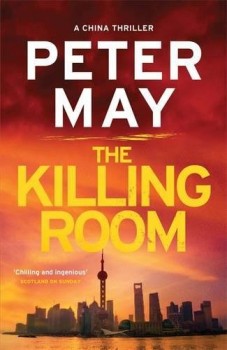 American pathologist Margaret Campbell returns to China, this time to Shanghai, to assist the police when they discover a mass grave containing butchered women.

This is the third of Peter May’s ‘China Thrillers’. We rejoin American pathologist Margaret Campbell and Deputy Section Chief Li of the Beijing police, working this time in Shanghai. Campbell and Li worked together to solve two high-profile crimes in the capital; their love affair was always blighted by cultural misunderstandings and local disapproval, and nothing has changed with a move to another city.

The discovery of multiple body parts in a pit on a joint-venture building site is embarrassing for the Shanghai authorities, and Li is drafted in from Beijing to assist, as a man with a reputation of getting results against serial killers. Campbell is briefly in Chicago where her father has died, but flies to Shanghai at the request of Li, who realises that Campbell’s pathologist expertise will be invaluable.

And so it proves. Margaret’s eye for detail provides vital clues which help to first identify the victims, and then to establish commonalities which provide the key. Unfortunately, life is complicated by rivalries, organisational, political and personal, the latter in particular in the form of Mei-ling, Li’s equivalent in rank in the local force. Mei-ling takes Margaret’s relationship with Li as a personal challenge.

As with earlier books in the series, the author provides plenty of background on China in a way that is informative without being intrusive. The change of venue gives him the opportunity to dwell on the essential differences between Beijing and Shanghai, Shanghai denizens being more commercial, sophisticated and less inclined to take the rules quite so seriously.

Occasionally the instruction becomes a little obvious, such as when we have one Chinese person reminding another that a zigzag bridge is proof against evil spirits (which cannot turn corners). Well, duh. But generally it all adds to the interest, and provides a snapshot of a China – in 2001 – in the middle of what must surely be the fastest modernisation of any country, anywhere, anytime.

The nexus of the crime turns out to have some connection with China’s one-child policy, which gives the author reason to have Margaret and a senior Chinese figure debate the issue. As the only country in the world to take responsibility for human population growth, China gets scant credit, which always strikes me as unfair: it is surely hypocritical to wring your hands about species extinction while refusing to do anything about the most direct cause, the meteoric explosion in the number of people on earth.

Margaret’s expertise is made more use of in this book than hitherto, and those who like discoveries from the mortuary slab will find this outing particularly satisfying. The urgency to find the culprit, the frustrations of the task and the romantic entanglements mean that, as with earlier books in the series, there is barely a dull moment as the book rushes to an exciting conclusion.