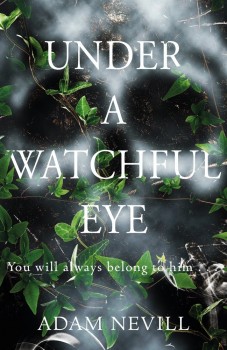 Under a Watchful Eye

Horror story writer Seb Logan is being watched. He doesn’t know by whom and nobody else can see the dark figure stalking him.

Seb Logan, a successful author of horror stories, finds himself drawn against his will into his own real-life psychological horror experience that shakes his comfortable and ordered life. He realises that he is being watched, stalked even, by a mysterious figure who it seems no-one else can see. The stalking man is only the start of his nightmare as Seb suspects that he may soon be the victim of other even more serious criminal intent.

This is the eighth novel from the author of supernatural-themed stories. In Under A Watchful Eye, Adam Nevill plays with our acceptance of normality and life taken for granted with his themes of manipulation and confusion. We see Seb’s life suddenly career out of control and his feeling that he is losing his reason due to the interference of a malignant force and his past catching up with him. The novel explores the idea and world of out-of-body experiences and the concept of astral projection or travelling. If I remember correctly this was the subject that fascinated some, mainly hippie types, in the late 1960s and early 1970s.

This is subtle horror fiction. The content errs on the unsettling and disturbing side rather than aiming to shock with blood and gore. There is a gradual, but not slow, build-up of tension and shivers. The writing, particularly at the beginning, is literary in style and has hints of Jon MacGregor (If Nobody Speaks of Remarkable Things) with the same fine attention to detail of not just the visual, but also aural and olfactory effects on the mind and comprehension. Later as manifestations impose their influence the focus intensifies and Seb investigates the possible reason for his plight, the story becomes claustrophobic and the plot develops an even more disturbing direction.

Nevill plays with the narrative at times which adds to the reader’s experience by adding to the feeling of unease generated by this intelligent and eerie novel.