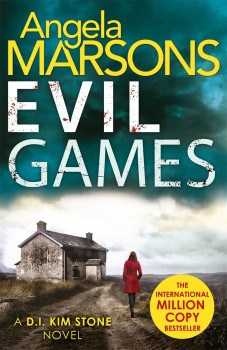 Detective Inspector Kim Stone’s latest adversary is a sociopath who manipulates the most vulnerable into killing.

This is another outing for DI Kim Stone. Others in the series include Lost Girls, Play Dead and Silent Scream. This case starts when a rapist is found stabbed to death in the street. Stone soon discovers that this is a revenge killing, but needs to go out on a limb to resolve the case which she thinks is more complicated than it first appears to be.

Stone is an intriguing character. The personal tragedies she experienced as a child clearly shaped her personality as an adult and a police officer. They also play an important part in this story as they are cruelly turned against her.

Stone is up there amongst the top echelon of fictional damaged detectives.  She is held in high regard and has authority but she also alienates some colleagues – one refers to her as a cold bitch. The challenge of creating a villain who is a worthy adversary for this clever and intelligent detective has been achieved successfully and is no archetypal stock villain.

This is police procedural fiction at its best, told with the confidence that comes with knowledge and experience. Well established routines and fully-formed characters are set in an efficient plot. It is well-paced to hold the attention by gradually revealing and developing events. Reading how Stone and her team investigate and arrive at their conclusions is believable. What shines through is the close relationship and humour between the DI and her DS (Bryant).

Stone is based in the Black Country as is the author and the mention of place names and local dialect gives the story a real sense of location.

Evil Games is one of those rare crime novels that make you want to consume them in one sitting.