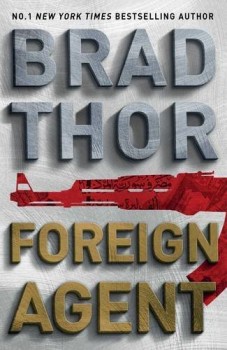 The CIA is looking to find an agent with the necessary skills to deal with increasing numbers of terrorist outrages in Europe. It finds him in the person of Scott Horvath, but Moscow already has its own operative working under very deep cover.

The novel opens with a very tense and eventually dramatic chapter in which we find a group of US Special Forces set up in a safe house on the border between Iraq and Syria. Their mission – once they get the go-ahead – is to abduct a very important member of ISIS. In spite of the obvious danger involved in such an undertaking, there is a very relaxed atmosphere in the house, so much so that they are planning a party to which three women have been invited. It soon becomes apparent, however, that ISIS is aware of their presence and attacks in strength. Clearly their plan has been leaked.

The reader is prepared, therefore, for a plot concerned with the search for the source of the leak – by no means an original storyline, but one which an imaginative writer can use effectively. If this is their expectation they are doomed to disappointment because the identity of the traitor becomes almost incidental and the fact that there was one to begin with is almost lost in the labyrinthine plot. Perhaps labyrinthine is too kind a word to use and something like absurd might be more appropriate.

It begins with a conversation in the White House about the massacre of the Special Forces and the steps to be taken to deal with ISIS. In addition to President Porter, those present are the Director of the CIA, the Secretary of State and the National Security Advisor. These three might just as well have arrived singing ‘Oh, Mr Porter, what can I do?’ because they seem be almost bereft of ideas. They put forward the theory that ISIS are the ‘real’ Muslims, whilst the ‘moderates’ represent some distorted view of the religion envisaged by Mohammed. The President too appears to have no solution and the discussions end with his saying enigmatically that they can defeat ISIS by giving them precisely what they want – a conclusion that merely adds to the mystification.

The decision by the president to have the operation conducted by a single man – ex-Seal Scot Horvath - is one that will strike the reader as totally unrealistic. His capacity to influence events seems to be limited only by the capacity of his computer expert, Nicholas, to anticipate every enemy action and to respond by creating counter-measures at the speed of light. It is not merely electronic speed that Horvath can bring to his task. He is apparently capable of driving the 300+ miles from Berlin to Frankfurt in one hour, though it is difficult to see why he needs to go there at all. We are told it is something to do with the prisoner he keeps in the boot but it is by no means clear why he needs to keep him there. There is a large amount of rushing around in cars and after a time the reader can find himself dizzy.

What he is apparently attempting to do is to prevent Russia from dragging the United States into an all-out war with ISIS – an organisation they want to wipe out. Again, it is far from clear why they can’t simply do it themselves, making the main thrust of the plot wholly unconvincing. The actual detail of the plot is equally unconvincing, most of it, of course, involving Horvath. No matter how many people opposed to his purposes he comes across, he always seems to be able to cajole or threaten them into doing what he wants. One might expect a little more resistance occasionally.

It is also a little difficult to extend sympathy to Horvath. he first time we meet him is a few moments before he assassinates someone – not really a way of making him attractive to the reader. His political opinions seem to lie to the right of Genghis Khan – he thinks all Russians ever do is drink and smoke and has little or no time for anybody who is not American. Of course, in a thriller one doesn’t have to like the main character but he ought not to be wholly intolerable.