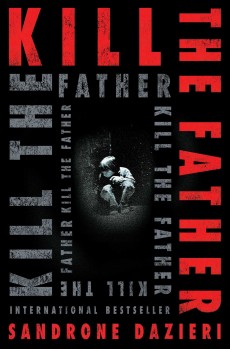 A kidnapper appears to be back in action in Rome after being dormant for decades. Two of Italy’s top analytical minds investigate.

It is difficult to pinpoint Kill The Father as it combines a police procedural, a conspiracy theory, a cat-and-mouse chase and a psychological thriller – it depends on which character is narrating the story.

The first sign of trouble that acts as the catalyst for the investigation is when a woman is found decapitated in a park outside Rome and her six-year-old son who was with her is missing. The obvious initial suspect is the husband/father but the chief of the Major Crimes Unit is uneasy about this assumption and gets two investigators involved unofficially.

Like other good crime fiction we have an unlikely pairing of protagonists and to add to the mix they are both darkly flawed. So our heroes are a police detective, Deputy Captain Columba Caselli, who is on sick leave recovering from physical and mental injuries after surviving an attack during a previous stake-out operation that went wrong. She is partnered by Dante Torre, a man who spent his childhood held inside a concrete silo by a masked kidnapper known to the boy as The Father.

If a partnership is to work, then each half needs to bring something special to the party. Torre, the more unusual and therefore more interesting character, has developed an ability to accurately deduce a person’s thoughts, intentions and true feelings by observing body language, choice of words and delivery. Caselli is a good cop – fierce, determined and efficient. An interesting friendship grows between them through mutual respect and eventually a caring relationship is formed. Our pair of investigators are both affected by their damaged pasts – Torre has crippling claustrophobia and Caselli suffers from panic attacks and guilt feelings.

The book feels a little over-long at times. The manhunt plot becomes a bit tiring about three-quarters of the way through the story, but picks up again. This is an unusual and complex case and as well as Torre and Caselli we have a cast of cops and criminals some of whom help and other who hinder its progress.

Sandrone Dazieri is the author of eight novels. Kill The Father is his British debut. Further thrillers in a series featuring Torre and Caselli are planned and the closing lines of this book leave the door open for more investigations.