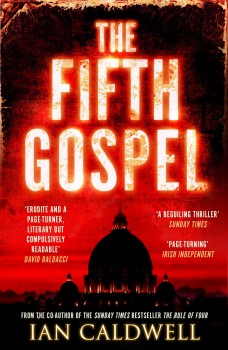 When Father Alex Andreou, a Greek Orthodox priest, finds the body of Ugolina Nogara in the gardens of Castel Gandolfo, the retreat of the Pope, he becomes party to machinations within the Vatican that will rock the whole establishment of the Catholic Church.

Life in the Vatican is remarkable enough, surrounded by thousands of years of tradition and splendour, without being the only Greek Orthodox Priest and a single parent. A phone call from his brother Simon, calls Father Alex Andreou to the Castel Gandolfo in a torrential storm, only to find Ugolina Nogara shot dead and his brother at the scene.

Ugo Nogara had been compiling a major exhibition for the Pope, based on the Turin Shroud. He believed that he had new evidence that disproved the radiocarbon dating which had declared it a fake. He had also found the Diatessaron, an early manuscript which collates the four gospels of the Bible, in which he hoped to find further evidence to support his theories.

As the story develops, layers of plotting within the establishment of the Catholic Church are uncovered. Simon is arrested for the murder of Ugo and is to be tried in the canonical court. Alex becomes aware of break-ins into his home and the places where he is staying. But more significantly, the interactions of the Roman Catholic and the Orthodox world are involved in the events that are unfolding.

This book is researched in infinite detail; the background and context, the workings of the Vatican with its internal politics and power struggles are set against its unique context as a separate country, enclosed within Rome. The ongoing significance of the Vatican is made relevant in a modern world context. The discussions of the meanings of the gospels and their relative relevance is explored carefully and interestingly. I was not bored or distracted for a moment despite the vast amount of reinforcing data that overlies the human story of two brothers beset by troubles and by their relationships.

This book is excellent. I did not expect it to be as gripping or as learned as it turned out to be.