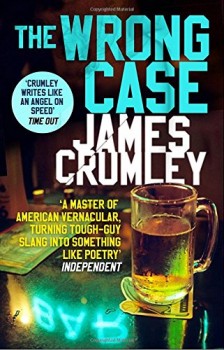 PI Milton Milodragovitch reluctantly accepts a request from Helen Duffy to find her brother Raymond. The investigation is revealing, if only about Milo.

James Crumley, whose works are now being reissued, is one of those authors about whom there are clearly divided opinions. Some big names – Leonard, Pelecanos and Rankin, for example – give him credit for his influence on the genre, but his books never reached the big-time, and some may find his style of hard-boiled fiction a bit too raw to be comfortable.

Crumley’s enthusiasms emerge through his protagonists, CW Sughrue, and here Milodragovitch – a love of the West, the harsh beauty of the landscape and the straightforwardness of speech. His work is clearly dated with indications of the 1970s counter-culture; drugs are everywhere and end of civilisation hovers on the horizon. Alcohol features significantly.

The book takes place in Meriwether, a small town under the Rockies, where Milo is kicking back in his office with a pint of whisky. Milo’s family have a history in the town, and family wealth makes him better off than most fictional PIs. His ownership of a local bar helps with the boozing. A woman arrives, Helen Duffy, seeking Milo’s help to find her brother Raymond, who has gone missing.

Milo is gratuitously insulting, and then makes Duffy a lewd proposition, at which point she leaves. Later, however, after thinking over the matter with his friend Simon, a serious drinker, he decides to make a few enquiries. Another friend Muffin, a fence, gets him started, and he seeks answers from a drug dealer called Lawrence Reese. Anticipating trouble, he arrives with a shotgun which he uses to make modifications to Reese’s house when he fails to get the answers he is looking for.

This pretty much sets the pattern for the rest of the book: Milo asking questions, stirring things up, and eventually making some progress. There are surprises on the way, and although it is clear fairly early on that Duffy has failed to give Milo all the facts, the final reveal does come as a shock. The plot is however less than convincing, and the characters startlingly variable in nature, apparently in a rather random way. Not everyone will find saturation in alcohol amusing, and for a man with resources, Milo does come across as particularly self-indulgent.

What may appeal is the world-weary sensibility of Milo, his attitude, and the first-person narrative, which drives the book along. There are long passages of vernacular speech which come easily to the ear; the use of dialogue generally is ahead of its time and has been emulated by many authors since. Crumley is a poet of sorts, wild and tempestuous, and it may be unkind to describe the book as very good in parts.