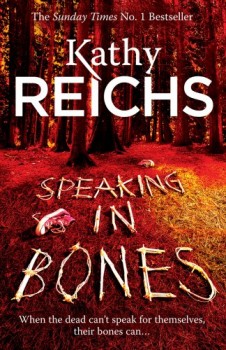 Some bones found near a remote mountain beauty spot lead forensic anthropologist Tempe Brennan into an investigation into a young woman’s disappearance.

Forensic anthropologist Dr Tempe Brennan is approached by Hazel Strike, known as Lucky to her friends. She plays Tempe a horrific recording in which a clearly terrified young woman is begging to be killed. Lucky Strike believes she’s matched some bones found near a mountain beauty spot with a young woman who was thought to have left home to be with her boyfriend, and it’s her voice that Strike believes has been captured on the recording she found near to the bones

The missing woman’s family firmly believe she still alive and it’s clear that they will not assist by providing any DNA samples, even if any could be extracted from the bones in the hope of finding a match. On the face of it, there’s not much that Tempe can do, but the sound of the woman’s voice haunts her and she’s drawn into a seemingly hopeless investigation, unwilling to just let go and walk away.

As ever with a Kathy Reichs book, its strengths lie in the intriguing detail that surrounds Tempe Brennan’s work, brought vividly to life in a way that only someone who has worked in the field they’re writing about can achieve. The forensic detail is fascinating, and Reichs is one of the few writers I know who can get away with frequent info dumps. Her only habit that I could happily have less of is the frequent foreshadowing and the constant ending of chapters on minor cliff-hangers. Foreshadowing is always annoying, and the cliff-hangers soon pall as a technique.

In Speaking in Bones, Tempe has to handle a crisis in her personal life, as well as an investigation that seems to be getting blocked at all turns. Her boyfriend, Quebec detective Andrew Ryan, has proposed, and whilst he’s not immediately pressing for an answer, it becomes clear that he won’t hang around for ever while Tempe dithers.

On top of that, she has her elderly mother to contend with. Daisy is in a home, still suffering from the mental health problems that have plagued her all her life, refusing treatment for cancer and living life vicariously through her daughter’s work. The complex relationship between the two women provides an interesting diversion from the main story, and Daisy is able to contribute in some unexpected ways to Tempe’s latest case.

The Tempe Brennan series is one that I’ve dipped in and out of over the years and whenever I read one I feel the urge to seek out those I’ve missed. Speaking in Bones brings Tempe into contact with some unhealthy and extreme views on the fringes of the Catholic church and opens up a window onto a frightening world in which people really do believe that demonic possession is a reality. It’s a terrifying fact that in today’s world, such fundamentalist beliefs seem to be on the increase rather than the wane. As ever, Reichs writes with an authenticity that is hard to beat.