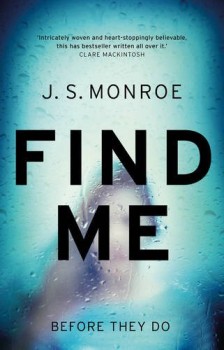 A young man is convinced that his girlfriend didn’t commit suicide and that she is still alive and in danger.

Jarlath Costello sees his girlfriend Rosa everywhere, but she committed suicide by jumping into the sea off Cromer pier five years ago. He becomes obsessed with proving that she is still alive and that he is not just suffering from hallucinations brought on by grief. Jar goes to extreme levels in his urgent need for answers. This is a psychological thriller and for a number of reasons you have to keep reminding yourself that this is fiction you are reading.

This is clever stuff. Part one is intricate and thrilling with the second part developing with twists and turns into even more disturbing territory. It’s set in the present and most of the story is told from Jar’s viewpoint, but altogether there are three narrators – to avoid spoilers, I shall offer no elaboration at this point.

There are sinister goings-on involving spies, conspiracies, the web and elements of the dark web. The descriptions of torture and animal experimentation make very uncomfortable reading. Many thrillers seem to have scenes of violence but no matter how graphic they can often be  dismissed as fantastical or at least not taken too seriously; however, some of the descriptions in this book are frankly quite unpleasant.

This is a story about coping with the loss of a loved one, paranoia and above all, hope. It also raises ethical issues about good science designed to help people being used as a method of torture.

JS Monroe is a pen name for Jon Stock, the author of a number of spy novels. This experience as an author, his knowledge of life at Cambridge University and his work as a journalist combined are all put to good use in telling this tale.