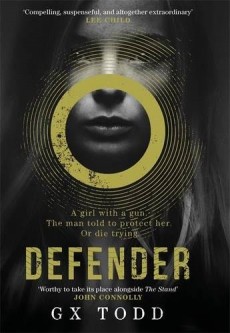 In a post- apocalyptic world Pilgrim listens to the Voice in his head as he travels. Voice has a purpose, but Pilgrim doesn’t know what it is yet.

Defender is the first novel by GX Todd and is book one of what she promises will be a four-part series featuring Voice. With three more to go there is plenty of time and space to develop the complexities of this idea. Whilst this story follows the fortunes of Pilgrim and Lacey we are introduced to the concept and character of Voice around which everything that happens appears to revolve.

Book one is a post-apocalyptic thriller. It is set in the USA and begins with Pilgrim stopping his motorcycle on a dusty road where he meets 16-year-old Lacey. Together they go on a road trip to find her sister. Both are resourceful – he more experienced of the new world order, she having spent pretty well all her life surviving in an isolated farmhouse with her now deceased grandmother.

Their journey features plenty of fast-paced action and as you would expect, violence and bloody retribution. Accompanying them in Pilgrim’s mind is Voice. Not his own internal one but an extra offering advice, arguing and sometimes mocking him and with whom he has conversations. This is not mind control or the replacement of people’s own inner voice and Voice can’t make people do something they don’t want to do although there have been an extreme number of suicides and murders.

Defender only offers hints at this stage of the series as to where this Voice comes from, what it has to do with the collapse of civilisation, why some people hear a Voice and not others and what is their purpose and the scope of their powers?

Todd conjures up effectively the sense of desolation and fear with the obligatory abandoned and crumbling towns and cities, burnt-out vehicles and deserted highways. Here we have the characteristic collapse of society and order where crime abounds with stock characters made up of violent gangs, scavengers and pillaging opportunists setting up their own empires. Survival and self-preservation are the paramount concerns for most. Distrust is the main reaction towards strangers and those who are suspected of being able to hear a Voice. This all works well because the backdrop is grounded in a still recognisable world. Nothing is too fantastical; the characters, their actions and the events affecting them all seem plausible.

The book offers a staple, eventful adventure but most of all it tantalises us with the anticipation of finding out the source and role of Voice in future stories when the narrative should open out to become more illuminating and compelling.