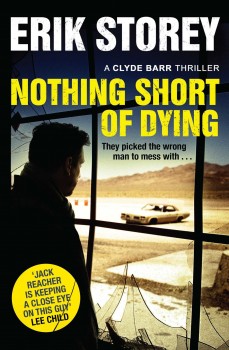 Nothing Short of Dying

Clyde Barr is back in the USA after 16 years fighting abroad, the last two in a Mexican jail. When he finds his sister is in trouble he sets out to track her down.

Clyde Barr and his sister Jen are forever bound together by the events of their traumatic childhood, so when he gets a phone call from Jen begging for help, he abandons his trip communing with the spirits of the forest and sets off to the rescue. Luckily, Clyde has spent 16 years abroad fighting on behalf of the weak, and is very good at it.

Clyde’s first stop is at Riverside, the town where he grew up. An old friend tells him that Jen was last seen with Lance Alvis, a heavy meth dealer, whose brother Spike runs the Cellar, a crappy bar in town. Clyde makes a visit, beats up Spike and his pals, and runs off with Allie, the barmaid, to find Alvis. He has to beat up some more hoods on his way out of town, but as there are only three this poses no problem.

Alvis has a meth manufacturing plant in the mountains well protected with armed guards, and Clyde calls in more help from Zeke, a man with whom he shared a jail cell in Mexico, and who just happens to have a cabin nearby. Zeke has the resources to get close to Alvis, but is seriously untrustworthy. Clyde’s mission to get Jen out of there, while protecting Allie and surviving himself, looks like a very tall order.

If you like rough, tough characters with a heart of gold, this book may be for you, but only if you can overlook a long list of shortcomings. The protagonist is the only person whose character we hear enough about to make him substantial, but his willingness to kill just doesn’t square with his supposedly soft heart. Much of the action takes place in the Rockies, and Clyde is happiest in the open air where men can be free – free to shoot wild animals that is.

The several fight scenes lack all credibility. Clyde’s ability to survive a rumble exceeds that of even Jack Reacher. In one particularly egregious instance, his car is blocked front and back by other vehicles and riddled by the automatic weapons of at least six gunmen. He not only manages to escape unscathed, but also in short order kills them all. When the bad guys get the opportunity to kill Clyde, however, such as when they find him asleep, they seem curiously reluctant to do him harm.

The cast are a very odd mixture of redneck stupidity (most of the potted back stories read like a country song) and literary pretension. For reading matter, Clyde carries Nietzsche and Haggard, and Zeke also has a big bookshelf: these are highly literate sociopaths, I’ll say that for them. This is a debut novel, and it shows.