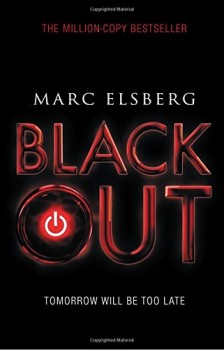 Someone is wiping out electrical power all over Europe. Can Piero Manzano stop the blackout before it’s too late?

Blackout is the first thriller by Marc Elsberg, originally published in 2012 in Germany. The story follows the impact of an international electricity blackout that threatens the world, caused by a hacker attack on the computer systems controlling power stations and the distribution grid. Step up Piero Manzano an Italian IT programmer who has a history of hacking and offers his expertise to the authorities.

This doomsday scenario reads like a movie script in print with short scenes switching from country to country as the situation worsens. We all take electricity for granted until a power cut when we have experienced minor or major inconvenience. The novel explores the bigger picture as we go behind the scenes with the military, governments, service providers, hospitals and power stations facing their problems and trying to deal with the crisis.

It also underlines just how reliant so many of our everyday sources and suppliers are on computer systems that need a reliable electricity to operate effectively. And it shows how society would need to cope without services like water supply, lighting, heating, phones, computers and fuel, all of which rely on electricity to work. The world could be on the brink of disaster if, for example, nuclear power stations can’t access electricity from the grid to cool their reactors. As the countries try to cope, power stations try to start up again, and agencies try to find those responsible, Manzano attempts to put a stop to what is after all an act of war on Europe where the military don’t know how to retaliate because they have no idea who is behind the attack.

This is a novel where the plot takes priority. It concerns itself with the impact of the crime, the outwitting of the antagonists of the crime and how to get things back to normal before more people die. This means it lacks a little on the character development so simply the hero is handsome and brave and his female associates are good-looking and feisty.

Elsberg is probably correct in his assumption that society would begin to collapse quickly; first in small ways then over time major unrest. People would start by helping each other out then before too long become selfish and look after their own. The novel makes you think – could it happen and how would I react if it did.

It must have been daunting to approach writing a novel like Blackout. The research alone into power supply, IT systems and in-place disaster management procedures is considerable. The author also has to avoid offering a workable blueprint to criminals at the same time as convincing those in the know by writing a plausible scenario and outcome.

Reading the book will probably make you at least consider stocking up on emergency essentials like candles – just in case.