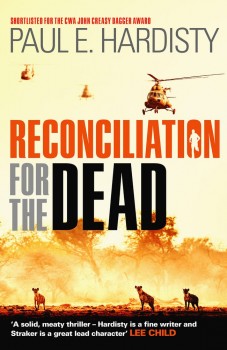 Reconciliation for the Dead

Former SADF paratrooper Claymore Straker returns to South Africa to testify before the Truth and Reconciliation Commission and seek absolution for his unwitting part in a horrifying act of inhumanity.

The terrifying suggestion that South Africa’s most extreme white supremacists developed chemical and biological weapons to be used against the black majority in pursuit of their own ‘Final Solution’ is at the heart of the final part of Paul Hardisty’s formidable and brutal Claymore Straker trilogy.

In 1998, former colleagues testifying to Archbishop Desmond Tutu’s Truth and Reconciliation Commission alleged that Dr Wouter Basson led research into a vaccine to sterilise blacks and a bacterium to kill only black people. Basson, dubbed Dr Death, denied it, but refused to seek amnesty. The following year he was tried for 229 counts of murder and 67 other charges including drugs, theft, embezzlement and fraud. After a 30-month hearing the judge ruled a South African court could not prosecute crimes committed in other countries.

This shocking, frequently bloody, explosive, all-action gripping sequel/prequel to the The Abrupt Physics of Dying and The Evolution of Fear deals with one of the most appalling chapters of South Africa’s bloody history.

Having survived both Yemen and Cyprus, Straker returns to South Africa to seek absolution. Over four days, he testifies before the TRC, recounting the events that led to his rebellion, dishonourable discharge and exile.

In 1980, he was a young paratrooper, fighting in Angola against the Russian-financed and equipped FAPLA insurgency, with its thousands of Cuban, East German and even Russian ‘volunteers’, a small part of the wider Cold War, that threatened to overrun the whole of southern Africa and sweep away the apartheid Boer regime.

On a patrol deep in-country with best friend, Eben Barstow, they became witnesses and unwitting accomplices in an act of such brutality they found themselves questioning all they had been taught about war, the sacrifices of the SADF – and their country. Deeply affected, Straker changed allegiance and found himself labelled a deserter accused of high treason, which set him on a journey into a world of institutionalised hatred from which no-one emerges unscathed.

Canadian-born Hardisty, now Director of Australia’s land, water, ecosystems and climate adaptation research programmes, is an unlikely ‘bleeding heart’. In 25 years as an engineer, hydrologist and environmental scientist, he has been an oil rig roughneck, explored for gold in the Arctic, a geologist in PKK rebel-dominated Eastern Turkey and worked on water projects in Africa. He was in Ethiopia in 1991 when the Mengistu regime fell, and three years later one of the last westerners out of Yemen after surviving a bomb blast in Sana’a.

When he writes about Operation Coast, the systematic killing of black prisoners, or the murder of anti-apartheid activists, he does so with a cool detachment, yet an intensity of moral indignation. It’s emotional stuff, and not for the faint-hearted. His vivid, atmospheric prose and strong and sophisticated narrative lifts the lid on secrets relating to the Angolan war many – including businessmen, politicians and powers far removed – would rather stay buried.

There are vivid portrayals of torture and violence and heartbreaking stories of families fighting, and not always succeeding, to survive. This is truth, dressed in a cloak of fiction, but Hardisty somehow balances the action thriller and the thoughtfulness and conveys all with a phenomenal sense of place.

His characters, from Straker’s paratrooper colleagues and superiors, to allies and enemies and those who switch between the two, are strong and cast in an authentic light. The panel of TRC commissioners, each with their own agendas, reflect the emerging republic’s struggles over post-colonialism, control of resources and continued fears about the potential spread of Communism.

Straker is a fascinating, highly conflicted character, a man trapped by time and place. An essentially decent and honourable man, he has done unspeakable things and this exceptional, riveting and provocative story of his search for forgiveness, offers some very harsh truths about man’s inhumanity to man.

This brilliant and moving novel, which can be read as a standalone, should be compulsory A-level reading to give students an understanding of the harshness of the world they face.