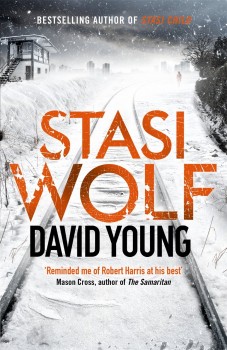 Oberleutnant Karin Muller is drafted south to assist in the recovery of two infant twins who have been abducted, a search that eventually becomes very personal.

According to state propaganda, East Germany in 1975 is supposedly largely free of crime. The abduction of twin babies in the Southern new town of Halle-Neustadt is giving rise to concern, but the Ministry of State Security, the Stasi, want the case wrapped up as quietly as possible so prefer to draft in police from elsewhere in the hope of a quick resolution before locals become aware of what is going on.

Oberleutnant Karin Muller is assigned from Berlin to take charge, together with a technical assistant and eventually Tilsner, whom she worked with in her last case (detailed in Stasi Child). Tilsner is nominally her junior, but his links to the Stasi mean Karin needs to be aware she is under observation. However, the Stasi in Ha-Neu are far more of a problem; they insist on a low profile, supposedly to avoid creating panic but seriously impeding progress with the investigation.

Despite this handicap, with a bit of invention and bending the rules prescribed for her, Muller makes progress. One of the twins is found dead and the other recovered alive. But a further kidnap makes it clear that the problem is not solved. Eventually, the discovery of an event some years ago and a very new and personal crisis come together and bring about a solution.

As with Stasi Child, Karin is at the centre of the story, but here we find out much more about her history: her unhappy childhood in a southern village, and the disappearance of a childhood friend in a politically-inspired pogrom. She makes a visit to her old home, and gets some unsettling news from her mother. She also forms a relationship with a man from Berlin, a doctor, although her feelings for the man seem curiously muted.

Although the reach and power of the Stasi form a major component of the plot, the effect in this book is less chilling than in Muller’s earlier outing, or in factual accounts of those who have suffered personally from Stasi persecution. Despite landing in an unfamiliar and architecturally brutal environment, the local police are cooperative and friendly and Tilsner becomes a true friend. While Karin faces threats and uncertainties from various sources, therefore, the sense of menace is somewhat lacking, at least up to the final pages.

In fact, although the author makes it clear that many of the incidents in the book are based loosely on real East German events and the plot is firmly rooted in place and time, the story could plausibly be transposed to the UK, say in a new town in the 1960s, without losing too much of its appeal. Life behind the iron curtain as portrayed by David Young feels less alien than suggested by some writers, despite the undoubted challenges he throws at his protagonist.