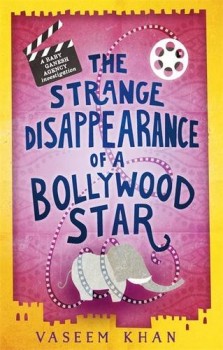 The Strange Disappearance of a Bollywood Star

The Baby Ganesh Detective Agency is called into action once again when an actor vanishes, disrupting the filming of a big-budget Bollywood spectacular.

This is the third outing for Ashwin Chopra, a one-time Mumbai policeman now retired with a heart condition, but still detecting as hard as ever. His agency operates from Poppy’s Bar and Restaurant, named after his wife, and staffed by himself and Rangwalla, once his sub-inspector. Also resident at the restaurant are Irfan, a young man who the childless Chopras have adopted, and a one-year-old elephant, Ganesha.

The tale begins with Chopra and family, fans all, attending a concert featuring Vicky Verma, the latest sensation from Bollywood. The audience are bemused by an apparent breakdown in the performance when Verma seemingly fails to reappear at the end of a trick. Chopra is even more amazed when he is later called to the house of Verma’s mother, Bijli, once a star of the silver screen herself, and told that Vicky has not been heard of since. Discreet but expeditious action to find him is required.

Meanwhile, Rangwalla’s assistance has been sought by Maharani Bibi, head of the large community of eunuchs in Mumbai, and known by the honorary title of the Queen of Mysore. Someone has been hiring groups of ‘girls’ to perform, and although nothing threatening has occurred so far, The Queen wants to know what is going on. Against his better judgement, Rangwalla agrees to don a wig and sari and become one of the guests at the next visit.

As we have come to expect from this series, Chopra finds himself in very hot water before matters are set to rights. At one point Chopra is incarcerated in a forgotten fortress and looks set for lifetime of rock-breaking. His rescue involves spectacular performances, worthy of Bollywood, by Poppy and friends, including Ganesha of course. Rangwalla’s attempts and singing and dancing, in contrast, come in for severe criticism from his new companions.

The light-hearted approach to crime-solving is as usual balanced by some pertinent observations on life in Mumbai which illustrate the daily difficulties faced by the many residents. Having made powerful enemies, Chopra can easily be made to disappear inside India’s seemingly ineffectual judicial system. The prejudice against the eunuchs and their resultant condition is briefly sketched. Above all, the author conveys the exhausting bustle of the city, and the sheer effort required to keep going in a place where municipal services are so wanting.

But none of this detracts from the sheer joy of Vaseem Khan’s writing. There is a new character, Shoot ‘Em up Sheriwal, who I look forward to hearing more of. ‘Mumbai’s virulent filmalaria’ made me laugh. Who knew that kissing was purged from Indian cinema as a protest against British values? And above all, there is Ganesha, Chopra’s constant companion and as endearing a character as you are likely to find in any detective story.