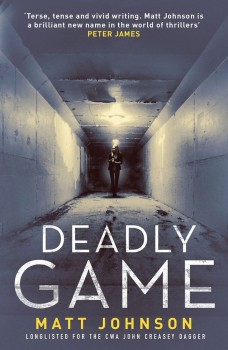 Special Forces soldier-turned-police officer Robert Finlay is seconded to a unit investigating the trafficking of young women from Eastern Europe into sex slavery in the UK.

Inspector Robert Finlay, formerly of the Royalty Protection squad, is something of a pariah following his return to work after a series of killings that claimed the lives of several former army colleagues and put his life and that of his wife at risk. As a result, Finlay and his wife Jenny are still in a safe house organised for them by their MI5 liaison officer Tony Fellowes

Finlay’s career looks to have hit the rocks. No one is keen to work with him as he’s seen as something of a bullet-magnet, and no one really knows or understands the killing of the various serving police officers that led to Finlay being taken off his previous duties. It takes some string-pulling by MI5 and Finlay’s old boss in the Metropolitan Police to overcome Finlay’s lack of detective experience, but they manage to get him seconded to a unit set up to investigate the growing trade in people trafficking and sex slavery emanating from Easter Europe.

I came to ex-Metropolitan Police officer Matt Johnson’s second novel with something of a disadvantage, as I hadn’t read his debut Wicked Game. An early info dump under the guise of an incident report on the deaths of four police officers and one man from MI5 goes some way to providing the backstory, and is a useful and succinct plot device. But there were certainly times as the story progressed that I had to refer back to this summary to refresh my memory of what had gone before.

It took a little while for Deadly Game to hit its stride for me. A lengthy and somewhat forced digression that sees Finlay taking a diving holiday to the Red Sea where he meets and saves the life of the daughter of a Romanian book publisher and gets invited to her wedding certainly didn’t help, even though the relevance of this was pretty clearly signposted from early on. Once the book did get going, though, I was quite happy to settle down and enjoy the ride.

Johnson tells a strong story, and his own experiences as both a soldier and a police officer stand him in good stead when it comes to the operational details and make up for some occasionally stilted dialogue and prose. The tension builds well over the course of the book, and leads to an excellent climax underground in the Forest of Dean, with Finlay and his friends receiving some technical assistance from a delightfully laconic young soldier from the SAS, that I enjoyed immensely.

The book alternates passages told from Finlay’s point of view in the first person with a variety of third person narrators, using short chapters to push the action along. It’s a style employed to good effect here and in plenty of other thrillers. Johnson’s characters are well-drawn and the plot is complex without being impenetrable.