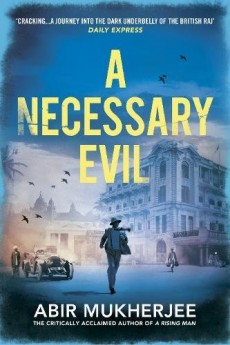 India 1920: Captain Wyndham and Sergeant Banerjee of the Calcutta police force visit the native state of Sambalpore to investigate the assassination of a Maharajah’s son.

Captain Wyndham and ‘Surrender-Not’ (the closest Wyndham can get to his sergeant’s first name) Banerjee are in Calcutta with Prince Adhir of Sambalpore when the Prince is cut down by an assassin. The culprit makes off. Prompt action enables the detectives to find him, and although he dies before he can be questioned, he carries the marks of an adherent of Jagannath, one of the avatars of Vishnu. It is thus believed that the reason for the attack lies in Sambalpore, where Jagannath is much revered.

The government of the Raj are anxious that there should be no disruption to the ongoing negotiation with the many native states to create a ‘Chamber of Princes’ which it is hoped will assuage a growing clamour for home rule. Wyndham and Banerjee are therefore directed to accompany Adhir’s body back to Sambalpore for the funeral, and to discreetly investigate the reason for the murder. On arrival, they find the Maharajah fully supportive, and set to work.

Several motives suggest themselves. The Maharajah is old and ailing, and the prospect of Adhir inheriting may have upset those who disliked his untraditional style, and his foreign mistress. His brother Prince Punit may be making a bid for power. There is also the matter of the possible sale of Sambalpore’s diamond mines to a Western company, in which some members of the court look to have a vested interest.

The efforts of Wyndham and Surrender-Not gradually uncover the way the tiny but independent state operates, but the prime mover behind the assassination remains elusive. Wynham goes tiger-hunting on the back of an elephant, and spends time in closely-supervised visits to the zenana, home to the Mararajah’s wives, concubines and several hundred other women. Eventually the truth is revealed, but whether Wyndham will be able to achieve justice is another matter.

As the author reveals in a note, the kingdom of Sambalpore did exist, albeit under the control of the East India Company as far back as 1849, and the diamond mines and the reverence for Jagannath were a matter of fact. Just how far the author manages to convey the atmosphere of a nominally independent state in 1920 is for the reader to judge, but the skulduggery and competition for influence is certainly something which appears in non-fiction accounts of such places.

This is the second in the Sam Wyndham series. The background is an exciting recreation of India at the time it was set, but Wyndham himself sometimes seems a little too excitable. His opium addiction gives him an exotic tinge; cast against your typical stolid ex-Scotland Yard detective he at least has the benefit of novelty.