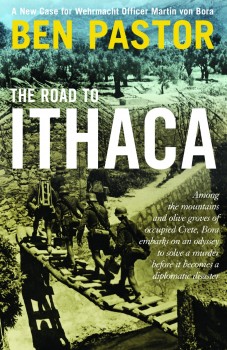 The Road to Ithaca

Wehrmacht officer Martin Von Bora lands in Crete immediately after the 1941 German invasion and is handed the investigation into a possible war crime.

In early June 1941 the German army is just weeks away from the invasion of Russia. Wehrmacht officer Martin Von Bora is in Moscow on diplomatic duties, and not enthralled with orders for a brief trip to Crete to pick up some choice wine for embassy parties. On arrival, he is given a new job, investigating the shooting of a civilian and family which looks very much like the work of trigger-happy German paratroopers, and only a few days to complete his task.

The island is still being brought under control after a massive and costly airborne operation: allied troop remnants are still in hiding, and the locals are mainly hostile. The crime is attested by photographs taken by a British soldier now at large, delivered by a British Anglo-Indian officer, Sinclair, currently in custody. Sinclair’s accusations need to be scrutinised – the matter is of interest to the International Red Cross as well as, for some unexplained reason, Heinrich Himmler.

With assistance from the head of the local Iraklion police, Kostaridis, Bora establishes that there are at least two locals with reasons to dislike the dead man, and also discovers that the victim was rather more than the archaeologist he appeared to be. To get to the bottom of things, however, Bora needs to make a trip on foot into the interior to find the primary witness, a very hazardous undertaking.

This is the fifth Bora novel and takes place after Lumen, set in Poland in 1939. Bora at this stage of the war is still looking forward to the challenge, unlike the increasingly damaged man portrayed in Tin Sky, Liar Moon (1943) and A Dark Song of Blood (1944). While he is not necessarily likeable, his fearsome discipline and rigid adherence to his sense of honour make him something of a phenomenon.

He is also a complex man with many talents, a prodigious memory and facility with a long list of languages. His only partial understanding of the Cretan dialect is a rare exception and provides the excuse for taking a translator on his trip inland, an American woman familiar with the local patois. Although he is unwilling to share his thoughts with his companion, her presence triggers his own recollections and acts as a counterbalance to his personal preoccupations.

A character of such intelligence and sophistication calls for an author who can carry the portrait off convincingly, and Pastor undeniably achieves this. Whether dodging his Soviet shadows in Moscow, or interacting with the Luftwaffe troops in Crete who regard him with suspicion, the background feels completely realistic. And the man at the centre of the action is always engrossing, a soldier dedicated to his task but with a complete understanding of the meaning of his actions. This is historical fiction at its best.