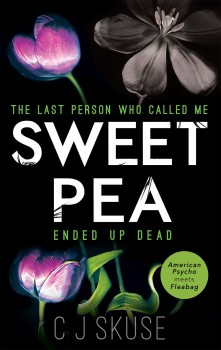 Rhiannon is an editorial assistant on a provincial newspaper, and despises her invisibility – except when her lofty morals drive her to kill.

Rhiannon’s life could make ditch-water look glittery. She works as an invisible, underrated editorial assistant at a provincial newspaper in south west England, her assignments rarely more fulfilling than a paragraph about the local French food market. At home, it’s no better. Craig, her long-term boyfriend is sexting and bonking one of Rhiannon’s colleagues. Although guilt does force him to make some scrumptious meals, the rest of the time

Really, Rhiannon may as well not exist. And don’t even go there about Rhiannon’s social life. Nights out with a bunch of baby/wedding/man-pulling obsessives have all the allure of an open drain outside a pub on a Friday night. She spends most of her evenings with the girls in silence, just filling an otherwise empty seat; she doesn’t have kids, no way is she getting married any time soon, and as for men …

But things are about to change. Rhiannon is angry, moralistic, and she’s carrying more baggage than a Ryanair flight to Ibiza. Unluckily for those who cross her path, she doesn’t have an off button. And she’s ready to kill.

It is rare a book sends tears rolling down my cheeks. Rarer still that those tears are from laughter. Perhaps it is because Rhiannon is daring enough to verbalise those viciously dark, bitchy little thoughts most of us have but haven’t the guts to say. It is rare too that a protagonist leaps so convincingly off the page that I want to meet her in real life (although I would remember to be on my best behaviour in Rhiannon’s presence, and carry a can of pepper spray and a knife just in case). But CJ Skuse has managed all the above with simplistic yet detailed writing.

Sweetpea is written in the form of a diary, which lends itself to drawing the reader in through its immediate intimacy. Most chapters start with a brief list of who Rhiannon wants to kill on that day, and, often, why. The rest of each chapter is a heady mixture of the shenanigans at work and at home, evenings out with the PICSOs (her boring friends) and her assassinations of the local baddies who happen to have offended her impeccable if cherry-picked morals. Backstory trickles out discreetly, giving the reader an increasing understanding of why Rhiannon behaves in such a singular way, without an interruption to the story’s pacing.

Psychologists tell us that serial killers have a moral compass that it is just off kilter with the rest of humanity. CJ Skuse has taken that idea and run with it to bring her main character to life. Rhiannon loathes bullies, paedophiles, rapists and people who abuse or hurt animals. Don’t we all?! But where we gasp, tut, shake our heads at the horrific behaviour of our fellow humans and turn the page to the sports column/recipe of the day, she weeds them out and sorts them, once and for all. And her sadism is off the Richter scale when she seeks revenge.

Sweetpea is coal-mine dark. It is a sexually graphic, vulgar, violent story, filled with more ugly and unrepeatable swearwords than a building site on a Friday afternoon. Its explosive fury is shocking, and could offend. But that is the idea, and even though I wouldn’t want Great Aunt Mildred to find this book loitering on the table, it is an excellent read.

It is not without fault. There is a large list of also-ran characters, and because of the style of writing, it is not always immediately evident who Rhiannon is talking about. There is little sense of place, except for her brief forays to Birmingham and Wales. But one can forgive these weak points, as they don’t seriously detract from the story.

This book offers the ultimate in flawed characters. None escape Skuse’s attention to detail, and viewed through the eyes of such a disturbed protagonist, there is no smack of stereotype. We could forgive a reader who can’t suspend disbelief as the death-toll mounts. How can a woman get away with killing so many people? I can only say, read to the end. As I approached the final chapters, I was asking that question myself (yes, this is so convincing, I was rooting for a serial killer!) But the final sentence completes the story in a realistic way.

For those with a strong stomach, who want detail and a dark unusual journey with a serial killer, books don’t come much better than Sweetpea. Bravo, CJ Skuse, and don’t take too long to write your next book!