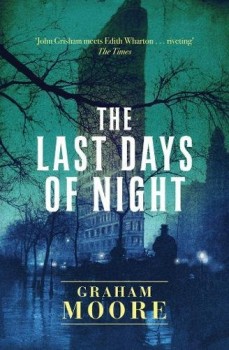 The Last Days of Night

Brilliant novice lawyer Paul Cravath must help his first client withstand a $1 billion dollar patent suit – with the very future of electric light itself at stake.

This is a superbly researched and imaginative reconstruction of the 1880s $1 billion dollar lawsuit in which Thomas Edison sued George Westinghouse to establish who should power the future of America. Graham Moore is no great stylist, but he keeps an always compelling story moving and the pages flying. If it all reads a little like a film script, that’s because it is. Moore won a screenwriting Oscar for The Imitation Game in which Benedict Cumberbatch played homosexual computer pioneer Alan Turing. Now he is bidding for a second with this, soon to start production and as yet officially untitled, which will star Eddie Redmayne.

The ‘War of the Currents’ was perhaps the most famous case in American legal history. Edison and his company General Electric, backed by that Genghis Khan of Yankee capitalism, JP Morgan, had won the race to the patent office for his electric bulb.

The ‘miracle’ of electric light was still in its infancy and unbelievable riches awaited the man who could power the nation with this new technology. Edison sued his one remaining rival, Pittsburgh inventor Westinghouse, for an unheard of sum for infringement of patent rights. If you think a story about light bulbs is pretty tame, think again!

Moore’s fast-paced, part legal thriller, part techno-suspense story is a tale of larger-than-life characters and devious, sometimes criminal, goings-on. It is also in part a thoughtful examination of the price we as a society pay for new technology.

The story is told by Paul Cravath, the brilliant novice lawyer hired by Westinghouse.
He would go on to become a legend and his firm, Cravath, Swain & Moore, is still in business. Using Cravath’s perspective as a technological ignoramus, Moore is able to use his necessary education into the essentials of electricity so the reader understands the story without being buried in minutiae.

But it’s not just the technical detail that makes this novel so good. The characters, Edison, Westinghouse, Morgan, the brilliant, but impetuous and unstable Serbian inventor genius Nikola Tesla, Alexander Graham Bell – even the love interest in the shape of opera singer Agnes Huntington, who Cravath, in fact, went on to marry – are, as they really were, giants of their, or any other, age.

And the setting, Manhatten in the glittering ‘Gilded Age’ of New York City – lobsters at Delmonico’s, soirees where every guest is a millionaire and you weigh the women’s diamonds rather than value them, where the writers, musicians and artists of Stanford White’s Players’ Club mix effortlessly with the mega-rich – conjures up something of the glamour of Fitzgerald’s The Great Gatsby.

This mesmerizing, clever, and absolutely entertaining piece of ‘faction’ brings it all to vibrant life. The task facing Cravath is truly daunting. If he cannot break the patent claim, Edison will have a monopoly on light itself. But the young lawyer is convinced of his own abilities and circumstances force him to adapt what at first appears a rather priggish attitude as he goes along.

This uniquely American story of innovation, the conflicts of developing a new technology and the way in which the inventors were changed by the process is the key to the story.

For those who think the Microsoft-Apple war was nasty – and chapter standfirsts of quotes reveal the depths of animosity between Bill Gates and Steve Jobs – it’s all been done before. That spat between marketing man and engineer/inventor was merely a case of history repeating itself!

To sort out fact from fiction, Moore provides a comprehensive author’s note which is well worth taking the extra time to read. It takes nothing from what is a superb novel.