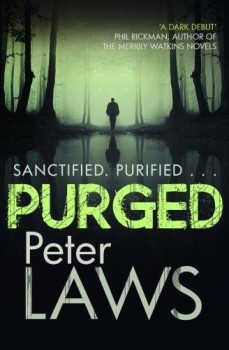 Ex-Christian minister Matt Hunter is on the trail of a killer who is determined to save the souls of his victims.

Matt Hunter, formerly a Christian minister, now a professor of sociology, helps the police with religious-related crimes. He is no Father Brown as he has lost his belief and is working on writing a book that debunks the Christian faith.

The author, Peter Laws, is himself a Baptist minister and appears to be employing his novel to express misgivings about some aspects of Christian worship, those who lead it and religious fervour in general. The story certainly gives us reasons to have reservations about some of the evangelical approaches of the Church and question the influence of charismatic preachers bidding to increase the numbers of their followers. Is Laws expressing his own views about faith or has he spent a lot of time harvesting the thought, views and opinions of those who have doubts? Or maybe it is that a man who has lost his faith makes for a more intriguing fictional character than one who hasn’t.

In Purged, Hunter and his family are on holiday in a seemingly idyllic village when a local girl goes missing, followed by further disappearances and they find themselves involved in the investigation with the local bobbies. The past catches up with all the main characters and is crucial to the storyline, influencing and shaping their present lives and dilemmas. The role of friendship is explored effectively and again is at the heart of the plot.

In this, his first novel, Peter Lewis spins a tidy yarn and has got to grips with misdirection, formulae and other crime novel tropes. His writing is proficient and entertaining. The setting is sinister, but at times in a creepy Hammer movie sort of way and is comparable with a Midsomer-type location.

More books in the series are promised so is Matt Hunter and his family interesting enough to warrant a following and is the world of religion related crime a rich seam worth mining? In this investigation Hunter proves his worth as an observant and delving type who is prepared to take risks. His family all contribute to the shape and texture of the story as well as being strong willed and determined. This story has an unusual theme and with his personal knowledge and experience no doubt Laws can find plenty of mysteries which Hunter’s talents can help solve.

There may be concerns that a novel by a practising minister may contain a subtle attempt to preach in the same way some Christian rock musicians are keen to do in their songs. There are discussions about the existence of a God and the role of baptism and theology but these are relevant to the plot so overall he does seem to play fair and sticks to his alternative role of being a novelist focussing on his fiction.