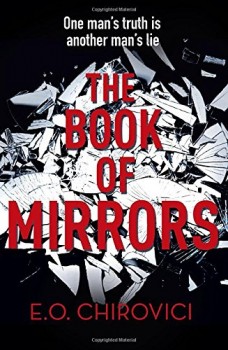 The Book of Mirrors

In Princeton, 1987, a renowned psychologist is bludgeoned to death. It takes 30 years and several attempts at investigation before the culprit is finally identified.

This book has a curiously 18th century feel about it, proceeding as it does by way of testaments by a series of authors. The first is by Peter Katz, a literary agent, who receives a letter and the first part of a manuscript from Richard Flynn. The manuscript details how Richard became involved with Wieder, a psychologist and professor at Princeton, who was murdered some years previously under circumstances still unclear.

The following section is written by John Keller, who Katz authorises to investigate the Flynn manuscript and to put together a book with a view to publication. Keller makes some progress but is never able to see a way to resolve the different versions of events of the night Wieder died. His questions do, however, stimulate Roy Freeman, a detective involved with the initial investigation of the death, to renew his efforts, resulting in a final resolution.

For all the structural complexity outlined above, the crime at the heart of the book is actually relatively simple. Wieder was apparently killed by someone he knew who had access to a key to his home, and there were only three possible suspects: Flynn, a student employed by Wieder to organise his library, his girlfriend Laura who was collaborating with Wieder on a book, and Derek Simmons, a handyman. All had reasons to wish Wieder dead, although none apparently had any strong motive.

The final solution to the riddle turns on two matters of fact not revealed to readers until the final pages, which as far as conventions go in whodunits is a little like cheating. In addition, the two facts are matters which one might have expected to be revealed by a reasonably competent police investigation, so again the reader is perhaps entitled to feel a little aggrieved.

However, I found these matters less irritating than other aspects. The various characters who carry the narrative all feel impelled to introduce themselves by a potted life history: their attempts at relationships, career, and so on, with plenty of irrelevant detail. No doubt this is intended to give a bit of depth and to help the reader distinguish between them, but in practice it quickly becomes very dull. There is far too much tell and not enough show.