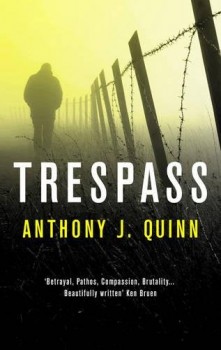 Inspector Celcius Daly investigates the abduction of a boy by a group of travellers suspected of smuggling and organised crime and uncovers a link to an unsolved ‘disappearance’ during the Troubles.

If you think Tartan Noir is dark, you’ll need a whole new palette of colours to describe Anthony J Quinn’s brilliant continuing exposure of the horrors of the Ulster Troubles and their aftermath 40 years on.

Everything about Quinn’s stories is dark. The events, both historical and current; the savage countryside of parts of County Tyrone where the mists and mountains of Lough Neagh provide an atmospheric and chilling background; but most of all, his protagonist, the taciturn, introspective and tortured Inspector Celcius Daly.

Like many survivors of the Ulster Constabulary, now subsumed into the politically correct but largely ineffective, Police Service of Northern Ireland, he feels the associated guilt of the past – the stitch-ups, the brutalities, the sordid deals with sectarian killers. Separated, he lives a lonely life, haunted by his own failures and those of his colleagues, on his dead parents’ run-down farm – his mother, was allegedly killed in crossfire between police and the IRA – with only a single black hen for company.

He has been sidelined to court duties while under investigation over his handling of the search for IRA spy, so the abduction of the son of a court solicitor offers him an escape. The main suspects are a group of travellers already under investigation for smuggling and organised crime. The boy’s father seems strangely unconcerned, then goes missing and is later found dead. And as Daly digs into the background, he uncovers a family secret linked to one of many unsolved crimes from the Troubles – the disappearance of a young gypsy woman and her baby.

His investigation reveals harrowing truths about past treatment of the travelling community, the present lawlessness of Ulster’s border country and just how much many of those now sitting in the power-sharing government in Stormont have to hide. As his inquiries progress, he comes to realise how much he has in common with the outcast travellers and soon finds himself entangled in a vigilante mission as he discovers how far these outsiders will go to find their own brand of justice.

The investigation becomes more complicated when the PSNI Special Branch take an unhealthy interest in the case, even follow him, but will tell him little of what they know or of the possible involvement of a senior politician.

This is the reality of hundreds of years of bloody history which reached a crescendo in that terrible period in the 1970s and 1980s. Quinn may describe it in beautiful lyrical language worthy of a major literary work rather than a crime story, but he still invokes a nightmare scenario around every corner.

This sense of authenticity often makes it hard to believe this is just a story. A superb novel, like its predecessors, this may be, but it holds more than its share of truth and is worth the study and understanding of any student of modern history.