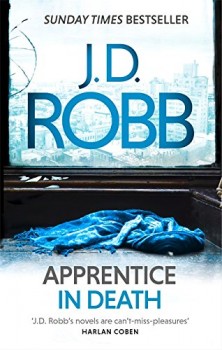 A sniper targets skaters at the ice ring in Central Park. And it is likely that more deaths will follow.

In Central Park there is an ice skating rink covered with people happily skating, oblivious to the sniper who, although nearly a mile away, has skaters in the sights of a long-range laser rifle. Death takes three of the skaters.

The sinister principle behind the plot of this novel is the capability of an assassin to kill his victims from a great distance with no warning or apparent motive. Lieutenant Eve Dallas becomes involved in the investigation and initially, she and her team try to ascertain which, if any, of the victims were killed for a reason. The investigation leads to the conclusion that more anonymous, and deadly, hits will follow

Roarke, Eve’s wealthy, handsome and intelligent husband devises a computer program to trace the origin of the shots. All of the dead are investigated to find a reason. The site of the shooting is identified. Possible shooters are identified. But more deaths ensue, and each time more people are killed.

The interesting thing about the plot in this novel is that much of the whodunit is resolved relatively early. The solving is clever and interesting. The remainder of the book is a race against time to capture the killers before more murders take place.

As usual JD Robb has crafted the pace and story of her plot to great effect. The story is exciting and gripping. The characters, with whom those who have read all of the ‘In Death’ series will be very familiar, do not disappoint in their deductive processes, their ability to extrapolate from evidence and the opportunism that allows them to be in the right place at the right time. I particularly enjoyed the analysis of the characters of the murderer and his apprentice.