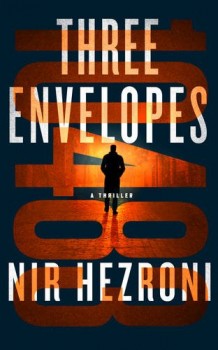 A notebook held by a law firm for ten years before its delivery reveals a terrifying pattern of mass murders and a pitiless perpetrator who has not finished yet.

A senior agent in an Israeli covert group known as The Organisation receives a notebook from a law firm, relating in first person present the activities overseas of a junior agent ten years previously. This man, identified only as Agent 10483, received three envelopes, each containing a target for elimination. His instructions were fulfilled, but in such a way that a breathtaking amount of collateral damage was involved.

At first sight, it appears that a warped and sadistic individual manipulated the recruitment process and exploited the opportunities offered by his work to wreak havoc. However, pages of the notebook are interleaved with another story, that of a contractor named Carmit, who has been visiting Agent 10483 in his sleep and administering psychic treatment. What impact did this have and who was orchestrating the process?

Exactly just how far Agent 10483 has exceeded his instructions is not clarified until the final part of the book. But despite indications that Agent 10483 committed suicide, someone is still around who has an animus; the initial recipient of the notebook is attacked after he passes the document to his superior. The chase is on to apprehend Agent 10483 before he does more damage, but he has had ten years to plan. And a nuclear device has gone missing.

This book has a clever plot and plays upon the fear that there are hidden persons out there prepared to do us harm for obscure reasons. The journal convincingly builds up a picture of a person with autistic traits and possessing none of the normal emotional connections which inhibit us from injuring others. His preparations are detailed so carefully as to be seemingly credible. Underlying the actions of Agent 10483 and Carmit is the picture of an implacable group with unlimited resources, able to conjure up money, explosives, passports or anything else required at a moment’s notice.

As someone who has worked in government, I tend to find all this somewhat difficult to swallow. I am happy to accept it, however, unless brought up against something I know something about. Here the suspension of my disbelief was punctured when informed that working two hours a night over a period of 18 months, a man excavated at least 250 cubic metres to create a basement in his ground-floor flat, installing reinforced concrete walls, sophisticated plumbing and electrical systems, all without the neighbours noticing. Such a man could have a lucrative career in construction, no doubt.

Leaving such quibbles aside, the book has plenty to enjoy. The various strands of plot are woven together well, a few red herrings thrown in to puzzle, and the truth exposed only late in the piece. There are passages that make you gasp in horror. And as for the hidden powers – well, remember, just because you’re paranoid, it doesn’t mean they’re not out to get you.