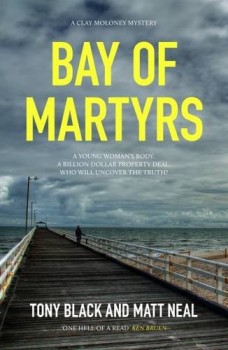 When a body is washed up on the beach of the Bay of Martyrs, the police seem reluctant to investigate. Journalist Clayton Moloney wants to find out why.

Clayton Moloney finds the limited horizons of his patch somewhat frustrating, south west Victoria’s Warrnambool not offering too much scope for journalistic coups. He smells something fishy in the way local politician Wayne Swanson is facilitating a major investment project at the Warrambool airport via a deal with Lachlan Fullerton, a local developer, but is unable to find hard information.

Then a body is washed up on a local beach – a girl from the town who had a number of regular and irregular waitressing gigs. How she came to be in the ocean is unclear, and Clay finds the police strangely reluctant to follow up available lines of enquiry. Frank Anderson, the local plod in charge, certainly has no liking for Clay and is not about to give any hints.

Luckily, Clay has a few friends in useful places: Gabby, with whom he has an on-again off-again relationship and who can get him copies of autopsies, and Senior Constable Eddie Boulton. More important is a recent arrival at the newspaper, Bec O’Connor, a photographer. Bec falls into a relationship with Eddie, but Clay and Bec have made a real connection, and Bec is supportive of Clay’s efforts to make some headway, which eventually bear fruit.

The authors create a picture of a small provincial town which rings true, and the two main characters are developed enough to carry them beyond the requirements of the plot. Both Clay and Bec are in their late 30s and looking for something they have so far failed to achieve. Clay is fighting it with a commitment to beer and 20 fags a day, but thoughts of a grown-up daughter he has never seen and other matters mean he has problems sleeping. Bec has been travelling for years to avoid her mother back in Ireland, and is looking for a place to call home.

The plot hangs together pretty well, although I sometimes wonder how far the authorities could get away with a lack of action without giving rise to comment, even if you do have a press overly impressed with the men of substance in the town. Clay spends most of the book nibbling at the edges of something without really throwing himself into it in true private eye fashion, but makes a credible reporter.

The book is co-authored by Tony Black, who has three crime series under his belt, and Matt Neal, a journalist who lives in the town featured in their novel. The joins are not visible, and although both are Australian there is minimal ‘strine’ to confuse an overseas reader. I could stand to read more about Clay Moloney, but is the town big enough to generate crime worthy of him?