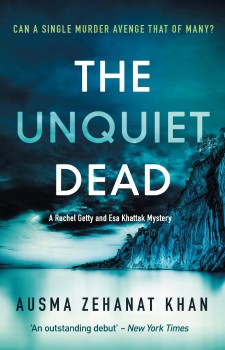 A man found dead at the foot of Scarborough Bluffs, a Toronto suburb, proves to have a history in Bosnia, where he played a very active role in the slaughter.

Detective Esa Khattak and his assistant Rachael Getty of the Toronto Community Policing Section are called in when Christopher Drayton is found dead. The Justice Department had been receiving information that Drayton was a war criminal culpable for murders in the Bosnian conflict in the 1990s. Before long it is established that Drayton’s real name was Drazen Kristic, and that he did indeed play an active role in the massacres at that time.

Kristic had been living in Scarborough for two years, during which time he had been receiving letters, snippets of evidence relating to the Bosnian war, and there are other signs that someone was aware of Kristic’s background. But a separate source of animus existed, arising from Kristic’s relationship with Melanie, a local woman with a short temper in continuous battle with her ex-husband over custody of their two daughters Hadley and Cassie.

The investigation is complicated with the emotional baggage of the detectives. Esa is infatuated with Mink, a beautiful woman who is setting up a museum of Andalusia, celebrating the period of Ottoman rule in Spain, and who seems to know something about Drayton’s death. Getty is the product of dysfunctional parents and is burdened with guilt about Zach, a younger brother who left home whom she hasn’t been able to trace.

The book has at its focus what was essentially action by the Serbs to eliminate the Muslims from Bosnia. The author is a specialist in the subject and does not spare the perpetrators, nor the pusillanimous international community, in her condemnations. Reading the harrowing tales which permeate the book, I felt torn. On the one hand it seems wholly right that the author should seize the opportunity to bring the facts to public attention; on the other it feels almost obscene to use them to construct a work of popular fiction.

This aside, the author constructs an engaging story encompassing various persons in contact with Drayton, revealing relevant detail slowly so that the explanation of events is withheld until the final pages. It would not be giving too much away, however, to say that Drayton is not the only Scarborough resident with a Bosnian past. What is puzzling is that this was not evident to Drayton himself, who one would have thought would have been sensitive to nuances of language and appearance.

The emotional entanglements of the two detectives with some of the rest of the cast are also given prominence. While this helps to bring them to life, there are times when the passion seems rather overdone; I did at one point wonder if I’d been transported to Peyton Place. And again, when measured against the agonies of so many in Bosnia, the least suspicion of melodrama strikes a discordant note.