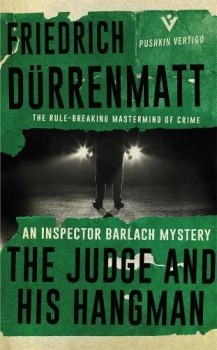 The Judge and his Hangman

The murder of a policeman turns out to be the final act in a life-long struggle between Inspector Berlach and his nemesis, a criminal mastermind.

On a foggy morning in 1948, police inspector Shmied is found shot through the head in his car, parked by the side of the highway in a Swiss valley. Inspector Berlach, the officer’s superior in Berne, is informed and instructs that secrecy be maintained. He visits Shmied’s lodgings and abstracts some papers for study.

Berlach is suffering from debilitating stomach pains, however, and it is his assistant Tschanz who has to take an active role in the investigation. It is Tschanz who points out that Schmied was dressed for dinner, and (by asking at garages in the valley) establishes that Schmied took a regular route. The two detectives lie in wait and follow a convoy of vehicles to a large isolated house, the home of Gastmann.

Gastmann is well-connected and Berlach is warned off by his superiors, although the house is clearly a place of interest. Tschanz is intensely frustrated and takes precipitate action, but he is unaware that Berlach and the man known as Gastmann have a history going back to their youth, and that the murder of Schmied will bring their dispute to a final conclusion.

It is inevitable that a book written nearly 70 years ago will show signs of its age, including the references to hats and cigars, but here more significantly the appearance of a criminal mastermind. The fight between Berlach and Gastmann is reminiscent of that between Holmes and Moriarty, a fundamental schism between good and evil. You don’t hear so much about the criminal genius in modern crime fiction, outside of super-heroes; perhaps this is something to do with a more sceptical attitude to the capabilities of characters on both sides of the law.

Friedrich Dürrenmatt is famed for his philosophical crime thrillers, which reject formulaic and predictable plots and allow for the vagaries of chance and individual personality. This book certainly displays these characteristics, leading me in one direction, allowing me to think all has been revealed before ending with an unexpected twist.

The tale is one of a series by Pushkin Vertigo, of highly-regarded but now largely forgotten works of crime fiction, re-released for a modern audience. Although short, the novelette features an engaging central character and plenty of action in a relatively exotic setting. It might particularly interest those who enjoy classic crime but are looking for something a little out of the usual pattern.