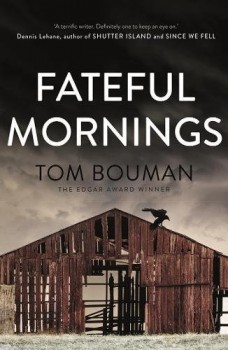 Carpenter Kevin O’Keefe reports his girlfriend Penny missing and admits to a shooting. County policeman Henry Farrell tries to find out what has been going on.

Henry Farrell is Wild Thyme’s only policeman, and spends much of his time with local issues, burglaries and speeding offences. He moonlights as a carpenter, plays fiddle in a country band, and is having an affair with a married woman. But something in town interests Pennsylvania and Federal crime agencies: the use and distribution of heroin and meth.

Farrell becomes involved when local carpenter O’Keefe seeks help. His girlfriend Penny, with whom he shared a trailer on Maiden’s Grove Lake, has gone missing. He also mentions that he shot a man at a house in town. Farrell visits both locations and finds them cleaned out, leaving little by way of evidence. Then a body is found in an adjoining county of a man with a drug record, shot dead.

There is nothing to tie O’Keefe conclusively with the death but it would appear that he and Penny, a long-time heroin user, have fallen foul of drug distributors. The scene of the alleged shooting is one of a number of properties recently bought by outsiders under a company name. As the year moves on from spring to summer Farrell gets a little closer, but this is a case where some things are never going to be known.

There are many American writers featuring a protagonist sheriff working in a small rural town, and there is plenty to like about Tom Bouman’s version of the species. For one thing there are several dimensions to the man himself, including his appreciation of nature, enthusiasm for quality carpentry and fiddle-playing. He is still mourning his wife, and also comes across as reserved – quietly spoken but with a definite authority.

Crisp and authentic dialogue and tight prose is not so uncommon these days, although this is up there with the best. The handling of the plot is very subtle; the author invites the reader to make their own way through the revelations as they occur without ever having Farrell or anyone else dictate exactly what is known, or suspected, about the drivers behind events. This helps maintain anticipation about the outcome, as well as a sense of realism.

It was rather odd that on a few occasions when Farrell is taking evidence, witness statements unexpectedly become augmented with sense recollections, as though the author was unable to resist giving extra life to a bare verbal statement. A little restraint was needed perhaps. But this is a very minor quibble, as I could read plenty more about Henry Farrell.

The depiction of the countryside in the book inspired me to ponder the strange contradiction often seen in US literature between an almost reverential stance about the natural environment, and apparent carelessness in its exploitation. Maybe it has something to do with the wide open spaces – in UK we don’t have enough left to be able to afford to waste any.