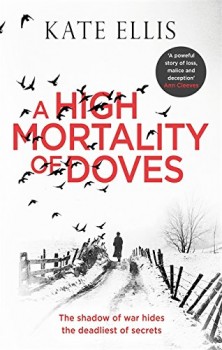 A High Mortality of Doves

Scotland Yard Inspector Albert Lincoln, a scarred survivor of the war on the Western Front, is sent to a remote Derbyshire village to solve a series of bizarre killings.

This macabre thriller, set in a remote High Peaks village in Derbyshire in the immediate aftermath of the First World War, has a dark heart, but is also a tale of mental instability, loss and malice leading to murder. It beautifully evokes both time and place.

The village of Wenfield, like thousands throughout the country, is trying to come to terms with the loss of a whole generation of its young men on the bloody battlefields of France and Belgium. Not enough return to work the land, or fill the jobs the community needs. Its isolation leads to strong feelings among the women mourning sons, husbands and lovers.

When a young girl, a wartime VAD who had nursed injured soldiers at the village’s ‘big house’, a wartime hospital, is found stabbed, with a dead white dove – the symbol of peace – stuffed in her mouth, Wenfield’s slowly returning tranquillity is shattered.

When two more women are killed in identical circumstances, Scotland Yard Inspector Albert Lincoln, a man both physically and mentally scarred by his time in the trenches, the death of his young son and a cold, loveless marriage, is called in by local police totally unable to cope with the crimes. A further murder takes place soon after his arrival, and he must also deal with rumours of a ghostly soldier spotted near the scene of the crimes as the village is thrown into panic with its women all terrified they may be the next to die.

Gradually he uncovers the all-too typical secrets of a small community from the abuse, sexual deviancy and privileged attitudes of its leading family to the vicious gossip and backbiting of the village women still reeling from the loss of their menfolk and facing a new threat in the devastating Spanish flu pandemic that followed, causing about 250,000 deaths across the country.

Much of the story is narrated in the first person by Flora Winsmore, daughter of the very traditional local doctor and a young woman eager to translate her own experience with the VAD into a nursing career, breaking the rigid bonds of the accepted place of women of this period.

Twists galore leave the reader suspecting almost every character as soon as they feature. If some of the early chapters appear a little slow, Kate Ellis’s research, settings and characterisation are impressive and, as the pace picks up, hold the attention and imagination to a poignant, dark and totally unexpected ending.

This is an entertaining, if ghoulish, read, mixed with a sobering reminder of the impact of the ‘war to end all wars’ on so many of our rural communities.