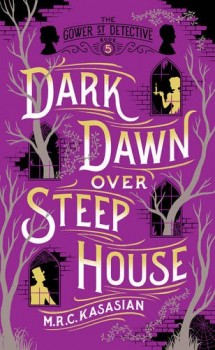 After the daughter of a respected naval captain, is ‘outraged’ on the dirty and dangerous streets of Limehouse and her attacker vanishes, a chance encounter in a cafe brings a new victim to light, and sets March and Grice on the trail of a serial offender.

They say personalities mellow with age, but time is doing nothing for Sidney Grice – London’s foremost personal detective – who, if anything, becomes more obnoxious with every re-acquaintance!

He is arrogant, intolerant, sexist, xenophobic, socially inept, rude, over-weeningly affected, the subject of odd phobias and a positive Rottweiler over lazy use of figurative speech. His attitudes to the lower classes are a shade to the right of Attila The Hun. His techniques for interviewing victims would drive a modern counsellor to the nearest psychiatrist and his polymath’s command of every subject, his superior memory, hearing, sense of smell and endless range of canes adapted for use as weapons or mechanical devices, make him the ultimate bore!

But it is Grice’s failings as much as his burning desire to see justice done which keeps me reading – with his long-suffering god-daughter, ward, assistant and chronicler March Middleton devoted to the vain, pompous and undeniable brilliant ass.

MRC Kasasian’s unpredictable pedant, despite numerous references to others of his exotic cases, is now on the fifth of the adventures recorded by his amanuensis, something he appreciates about as much as Holmes did the literary efforts of Dr Watson!

The Gower Street series has been notable for its violent, bloody and sometimes quite horrifying excursions into the seedy and needy world that fills the gutters of prim Victorian London.

This time the author excels himself with an unrivalled chronicle of horror. There is hardly a crime he leaves uncovered. March’s ‘ladies circle’, incipient women’s libbers, discover that a fine cause and strong spirit is no match for a blade and are slaughtered. An even more complicated than usual plot takes in rat-infested slums, maze-like alleys, filthy side streets and seedy opium dens run by gangs who will stop at nothing to protect their trade. Physical disfigurement, jealousy, treachery and immorality also march side by side with depravity, incest, kidnap, suicide and murder.

Any attempt to outline the plot would of necessity be a real spoiler except to say that when Geraldine Hockaday, daughter of a respected naval captain, is ‘outraged’ on the dirty and dangerous streets of Limehouse and her attacker vanishes, a chance encounter in a cafe brings a new victim to light, and sets March and Grice on the trail of a serial offender. That takes them to the hotel suite of a Prussian Prince, the hangout of an Armenian gangster and the ruins of a once-loved family home.

March is her usual plucky, resourceful and independent self, acting as the yin to Grice’s yang. She has already known tragedy in her life and survived some perilous encounters in previous cases, but her will and powers of recovery are once more to be tested to the very limit. And to keep the shocks coming right to the end, Kasasian finally reveals her relationship to Grice and the secret of her parentage which she has pursued for so long. But that’s not all, as Grice, obviously in a momentary loss of reason, shows his true worth!