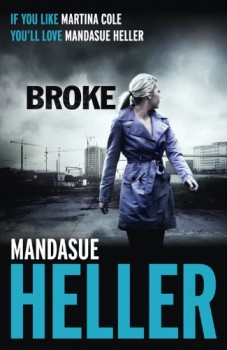 Marriage to the feckless Mark isn’t a bed of roses, but Amy loves him and their children, but someone is determined to break up her marriage and doesn’t care how far Amy’s life gets ruined in the process.

Amy Clark didn’t exactly have the best start to her married life. Pregnant at only 16, she went into labour at her reception while her new husband was outside having sex with one of the guests. And things didn’t get much better in the next five years. Mark Taylor is feckless in the extreme, despite now having a wife and two children to support. His idea of providing for his family consists of losing his last few quid in the betting shop, going back to work late and then getting the sack. But it’s not his fault, oh no, nothing is ever his fault.

But Jenny Abbot, unflatteringly known as Ginger Jenny, isn’t worried about any of that. Since the night she had sex with Mark at his wedding, she’s wanted to get off with him properly, and when she sees a chance, she takes it, doing everything in her power to get Mark away from his wife and family. With her help, Mark manages to dig an even bigger hole for himself by borrowing money off Lenny Yates, a man who doesn’t believe in giving anyone a second chance if they default on their debts.

The story of Amy’s struggle against almost overwhelming odds makes painful reading; it’s a bit like Cinderella with added drugs and violence, where the handsome prince is a bouncer at a brothel, and the wicked stepmother very much lives up to the standards set by the Brothers Grimm.

In the early stages, frequent and clumsy point of view shifts very nearly pushed me out of the story, but there was something horrifically mesmeric about Amy’s forced descent into prostitution and drugs, while her life is steadily dismantled by the psychopathic Lenny Yates, who really doesn’t care who he hurts.

This is a bleak, well-told tale set against the grimy backdrop of Manchester’s sink estates. Mandasue Heller’s writing, despite some technical flaws, is strong enough to carry Amy’s story. This is very much a story of a struggle against almost insurmountable odds and the most painful thing about reading this book is the knowledge that there are many, many Amys out there and for them there will be no happy ending.