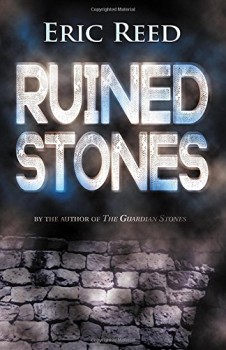 Grace Baxter arrives in Newcastle in 1941 as a junior policewoman and is immediately put to work investigating the death of a woman amongst the remains of a Roman temple.

Following her first case in her home Shropshire village, detailed in The Guardian Stones, Grace Baxter is posted to Newcastle-Upon-Tyne to assist a 1941 reduced wartime constabulary. Her arrival coincides with the discovery of a woman’s body in Roman ruins, arranged in the shape of a left-handed swastika.

Local superstition holds the ruins to be associated with evil. Grace, whose grandmother was a ‘wise woman’, feels the power of the place, and nearby resident Mr Rutherford is an enthusiast for its powers, and a night time visitor. But there is plenty going on of a more secular nature to give one cause for concern.

Grace is lodged with Mavis, whose gangster husband Ronny is supposedly away at sea, although recently spotted close to home. While Ronny is away, Mavis is entertaining Hans, a Dutch refugee. Stuart, a young thug disturbed by his brother’s death at German hands is heard making threats against Hans, who he imagines to be German.

At the shop recently taken over as a police station, officer in charge Sergeant Baines is rarely seen, finding the death of his wife and son in an air-raid difficult to cope with. The investigation is in the hands of the formerly-retired Constable Wallace. The younger staff have difficulty talking to Grace, who finds herself rather isolated. It is her efforts, however, which are instrumental in cracking the case.

Eric Reed is in fact the name taken by married partners Mary and Eric, who in a forward mention the selection of Newcastle as a conscious choice as a balance to the London-centric tendency for Blitz stories. The cold and fog makes a suitable adjunct to the chill coming off the old ruins to help sustain the atmosphere of a modern ghost story. The lack of heat or other comforts in a poor area of the city and the need to spend nights underground in cold and damp shelters also does much to create an atmosphere. Despite this, the main focus seems to be very much on the domestic concerns of a small local community, with rather a lot of inconsequential chat.

The authors make a creditable stab at sustaining the regional placing by the use of many Newcastle dialect words, and have added a concise Geordie dictionary at the back of the book to help. Whether in reality a Shropshire girl would be able to engage the locals in conversation without several weeks of practice I think unlikely. I had some experience of this myself in the 1970s, by which time regional differences were already starting to be modified by TV, and well recall hearing great slabs of Geordie, of which I understood perhaps one word in ten.