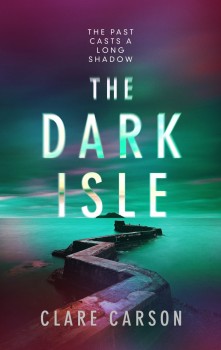 Sam returns to the island of Hoy, scene of her childhood holidays, to uncover the facts surrounding the death of her undercover policeman father.

Sam, the narrator of The Dark Isle, grew up in the shadow of the so-called ‘secret state’. Her unpredictable father – moody, often short-tempered, but at other times full of fun and stories about myths, heroes, tradecraft and traitors – was an undercover policeman. His killing has deeply affected Sam, who is determined to uncover the truth behind a body in a burning car on a piece of south London wasteland.

She is haunted by memories and echoes of childhood holidays on the tiny island of Hoy, with its dramatic landscape, seabirds, Viking ruins, myths and legends, and returns there, sure the truth of his death lies buried somewhere.

Hoy, with its tiny population – just 400 – is remote enough to shelter someone who doesn’t want to be found. Soon she meets a former intelligence man, whose daughter she was once friendly with. That meeting leads her into the confusing world of espionage on both sides of the Iron Curtain, illicit weapons dealers, thugs and liars – and also the innocent victims of their shadowy dealings. While Sam struggles with her own emotional process and grief, she also gains insights into the abuse and trauma these can inflict.

Carson cleverly uses a series of opposites to carry her compelling and multi-layered story. The contrasts between the sweltering London summer of 1976 and the wildness and storms of Hoy; a beautifully handled time split between Sam’s juvenile memories and present predicaments – and a careful balancing act with the withholding or release of information. Her characters are complex and the web of relationships in which they are caught drives the plot towards a dramatic end. But again, it is Hoy itself, almost a secret place guarding its own, often bloody, secrets, which grabs the reader’s imagination.

Writing a trilogy requires enormous discipline and consistency. This powerful episode explains much that concerned me before. And while this atmospheric finale with its strong characters and clever plot works perfectly as a standalone read, it’s well worth going back to the earlier books to see how those characters – particularly Sam’s dead father – have been developed.

But if there is one thing that annoys me, it is a crass mistake that ruins the climax of an otherwise brilliant story. It’s hard to imagine how something as basic as: “She delved into her backpack, clasped the Browning, swung the cylinder out, checked the loaded rounds” could slip through. The only pistols John Moses Browning ever marketed under his own name were the semi-automatic M1911 and the Browning Hi Power, both magazine loaded. No cylinder – that’s a revolver!

Despite the howler, this climax to the superb trilogy set partly in London and partly in the remote, bleak and beautiful Orcadian island of Hoy is a great finale to what has been a beautifully written series, with superb storytelling, clever and convoluted plotting, and a wonderful sense of time and place.

Where Carson goes now, we shall have to wait and see. But I shall miss the feisty, but in some ways surprisingly fragile, pot-smoking Sam and her quests on that lonely and haunting Scottish island.