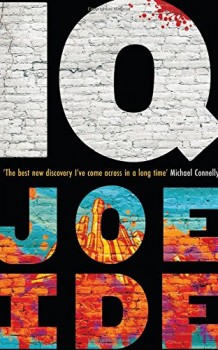 Asiah Quintabe, known as IQ, is presented with a testing puzzle when he is asked to find out who is threatening rapper Calvin Wright, better known as Black the Knife.

Asiah Quintabe, known as IQ, is a very smart black kid with a name in south Los Angeles for helping you out when the police are not able, or willing, to assist. By 2013 he has a considerable reputation acquired by word of mouth; not only does he get results but he will also take what you care to donate for his services.

A request to help out Black the Knife, real name Cal, presents some problems. Cal is a rapper who has made a load of cash very quickly, but over-indulgence in drugs is dissipating his talent. His manager and various other hangers-on need him back in the studio, but an attack by an over-sized pit bull has made him reluctant to leave the house. IQ makes rapid progress identifying the attacker via the dog, but the person who hired him remains obscure – Cal has made plenty of enemies.

In parallel to the Cal story is the tale of how IQ came to his current occupation. It starts in 2005, when a 19-year-old IQ is living with his brother Marcus. Marcus has a belief that acquisition of skills is merely a matter of application, and his positive approach has rubbed off on his brother. Marcus’ death in a hit-and-run is traumatic for IQ, and precipitates financial problems too. In desperation he invites a local hood, Dodson, to move in.

To raise cash, IQ organises a targeted series of night raids on stores carrying items with a modest cash value but easy to sell online. Unlike the disciplined IQ, however, Dodson splashes the profits and when IQ calls a halt comes up with a plan of his own. Lacking IQ’s skills, Dodson’s raid culminates in harm to innocent parties, including Flaco, a young boy who ends up orphaned and brain-damaged. IQ blames himself and makes Flaco’s welfare his primary objective thereafter, part of his overall determination to contribute to the community.

IQ makes a great protagonist, a serious young man who cuts through the fog surrounding the misdeeds presented to him using cool logic, entirely at the service of the people he lives amongst. In a black community which is at the low end of the reward structure, he refuses to be a victim and always looks for the positive. His determination to find the vehicle which killed his brother helped to develop the skills of observation and analysis which he has put to good use in righting wrongs.

This is an excellent first novel. The narrative gets straight to the point and the dialogue feels entirely authentic. It will no doubt draw comparisons with tales of another black PI from the same city, Easy Rawlins, but IQ is from a younger generation and the sentiment is distinctly different. His crime-detecting skills have something of the past about them, though, with plenty of clues and deductions that traditional crime fiction enthusiasts will enjoy.