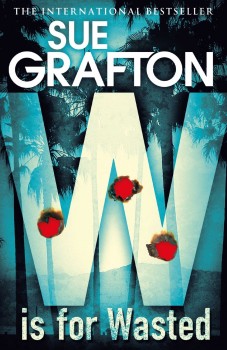 W is for Wasted

PI Kinsey Millhone finds that a man she never met has left her a fortune, but that his death was not as straightforward as it first appears.

It is 1988 and Kinsey Millhone, California PI, is made aware of two fatalities. One is a former colleague whose ethics were a little elastic, and has been found shot dead. The other is a transient, R T Dace, whose body was found on the beach, with Kinsey’s name in his pocket. Kinsey has never met Dace, is surprised to find that he is a relative, and more surprised to find that he left her all he had, a substantial sum.

Kinsey makes a trip to notify Dace’s immediate family, who take the news of their disinheritance badly. Back at home she spends time with two of Dace’s friends from the beach and is persuaded to join a raid on the camp of some panhandlers who were seen taking Dace’s stuff. The items recovered prove to be vital clues in the unravelling of the story behind both deaths.

Crime lovers will be familiar with Grafton’s alphabet series, Kinsey’s world can be returned to with confidence that the PI will be the same as ever: determinedly independent, sometimes prickly, sometimes vulnerable, but always disciplined and self-examining, feisty and resourceful. Her landlord, neighbour and friend Henry, plays his usual role as provider of pastries and sounding-board, and Rosie’s restaurant features in a scene or two. An old boyfriend, Dietz, shows up, but family commitments ensure he doesn’t stay too long, leaving the field clear for Kinsey to do the crime-solving.

Kinsey being who she is, the personal connection she makes with sympathetic persons is a feature of all her outings, but the Dace story adds something special here given the discovery of the relationship between Dace and her father, who she never knew. The unexpected inheritance is always a favourite plot device, given particular spice here by the unpleasantness of most of Dace’s nuclear family. The portraits she draws of this bunch are perhaps more convincing than those she makes of the homeless characters on the beach, who sometimes seem more like balanced libertarians than damaged souls to be altogether credible, but maybe the homeless in 1980s California were of a particular breed.

The other specific plot element is the aspect of drug research, on persons ill-equipped to defend their rights. Again this is not new - Le Carre’s The Constant Gardener comes to mind - but Grafton’s handling of the subject seems entirely plausible. The extensive research quoted at the end of the book doubtless helped.

The Kinsey Millhone novels have sold 12 million copies, and Sue Grafton has won a string of plaudits and awards, so if you have yet to read one I recommend you give them a try. W is for Wasted maintains the consistent standard of the earlier books and makes complete sense if it is your first. If you are already a fan, W enables you to return to Kinsey’s familiar world and bask in its charm.