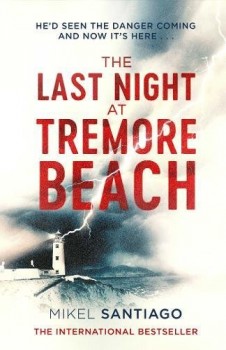 The Last Night at Tremore Beach

A successful musician, wounded by a recent divorce, seeks inspiration and renewal on the wild north west coast of Ireland.  He is, literally, struck by lightning and starts to have nightmare visions which foretell horror for him, his friends and his family.

Peter Harper is a successful musician who has lost his way emotionally, following his recent divorce. He has relocated from Amsterdam to a cottage on the remote Tremore beach in Donegal, hoping to come to terms with his new single life and to rediscover his lost muse.

The book opens with Peter weighing up his invitation to a meal at the cottage of his nearest neighbours, Leo and Marie Kogan, a retired American couple whom he has befriended, against the fact a massive storm is forecast.  En route to see them that evening, ignoring all the warnings of the locals in town, Peter is struck by lightning.

He starts to have vivid nightmares in which friends and family suffer horrendous deaths.  Certain motifs reappear, for example the damage to his picket fence which is always flattened in his visions but which, paradoxically, he and Leo have been renovating - a symbol of domestic security, no doubt.

Peter searches for answers about his visions from psychologists and psychiatrists near and far, and this is interwoven with his suspicion that, like his mother and his young son, he has second sight.  His two young children are due to visit for a few weeks for a summer holiday, and this intensifies his need to find out what his visions mean.

The local characters are well drawn, particularly the hideous Mrs O’Rourke who asks far too many intrusive questions when she first meets Peter. Judie, a hippie chick, provides the love interest for Peter.

The Last Night at Tremore Beach is well-paced and, from early on, the author builds a sense of foreboding.  It is interspersed with some convincing episodes from local life. I particularly enjoyed the trials and tribulations of film night in the village, at which Peter is asked to play the piano. This is an intensely readable book which I finished in only two sittings.