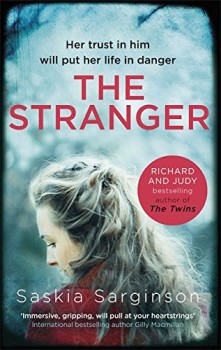 Ellie hasn’t been completely honest with her beloved husband Ed and now it’s too late. Suddenly her past choices threaten to destroy her chances of happiness.

The Stranger is reminiscent of Agatha Raisin in its slightly chocolate box description of country life, which is either a criticism or a recommendation, depending on your taste. The protagonist is Ellie, a wholesome and valiant character. She’s a mature woman – a baker and smallholder - who sets out resolutely to deal with the devastating consequences of her husband’s death.

The idyll of village life is further disrupted by the arrival of Luca, a Romanian with a talent for farm-related problem solving (and a distinct echo of Poldark or Mr Darcy in the shirt-removal department!) The community is wary of his presence, an attitude that’s personified in the outright hostility of the de facto lord of the manor, David. For a while it seems that the book is merely going to focus on which male character is going to be Ellie’s choice as romantic partner: the assertive but selfish David, or the quietly self-assured Luca. Her decision about who to trust plays a critical part in what follows.

Ellie herself seems to possess no obvious sleuthing characteristics and it is some time before I had more than a suspicion of what the crime might be. As to genre, The Stranger is not a whodunit or a whydunit but more of a whathappened. The first third of the book apparently has no crime at all, but of course all is not as it seems; for many years Ellie has hidden a secret that has taken a toll on her emotionally, while changing the course of her life. It is only as this secret is revealed that I appreciated that Ellie is much stronger than she seems.

When the crime was eventually made plain, I had to rapidly reassess the assumptions I’d made so far. This revelation about her past serves as a counterpoint to Ellie’s wholesome and idyllic lifestyle and I empathised with her as she seeks to resolve the questions that have remained unanswered all these years. I really felt I had joined Ellie on her journey of discovery, as she asks herself, “Have we built something good and true over a lie?” and realises that she is not alone in having secrets. As she comes nearer to the truth, her own safety is threatened.

The structure of the book involves a few switches from past to present but these are successfully handled. The plot develops at a good pace and was sufficiently involving to make me to want to read on. At the heart of the plot is a power struggle between women and men and though The Stranger is topical in its handling of outsiders and refugees in rural Kent, it isn’t as gritty and realistic as I feel it should be, given the nature of some of its themes.

Sue Kelso Ryan is obsessed with genealogy and her working cocker spaniel, aka The Dogginator. She's happiest in the middle of a field with the dog or by the fire with a good book.