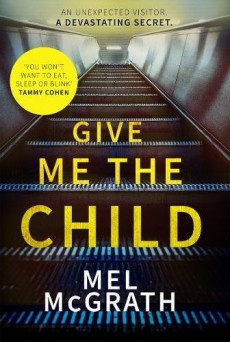 Give Me The Child

An unexpected night-time visitor and a bag of lies is about to destroy Cat Lupo’s family.

In the still of the night, Cat and Tom Lupo awake to the sound of the doorbell. Cat’s immediate reaction is someone has died. Right instinct, wrong person. The police are handing over a little girl into Tom’s care, a child whose mother has just died of carbon monoxide poisoning, a little girl who is the daughter he knew nothing about. Or so Tom says. It should be easy for Cat, a child psychologist desperate for a second child, to help Ruby Winter in her darkest moment. But there are hurdles.

First, the husband she had trusted implicitly, had been on a one-night stand whilst she was pregnant and suffering a breakdown. And second, Ruby is a disturbed child to whom Cat has a growing antipathy when she should have nothing but sympathy. Then there are the unexplained incidences, and Cat becomes fearful for Freya, her own little girl. But the nightmare has barely started.

I love thrillers where the enemy is inextricably linked to the protagonist – and even better when they live under the same roof. And what a joyful departure it is to not have the child as the victim, but instead see her portrayed as an evil influence that anyone would love to hate!

Give Me The Child opens with a scenario most of us dread, and there is an immediate connection with Cat. The polished, descriptive writing style, along with a profound insight into Cat’s mind, ensures the connection with her is never lost, even though she is a study in everything we would not expect a child psychiatrist to be. Cat is downtrodden, unsure, and unable to find common ground with the one child she could really help. Worse still, she is losing any positive influence on her own daughter. But she has a reason – a history of mental health issues. She is as terrified of people thinking she is losing her mind again as she is of the evil in her home. It’s a dilemma perfect for a psychological thriller.

Tom had my hackles up from the start. Again, the author has created a three-dimensional character. This one is perfectly portrayed as a lie on legs. He’s a little too slow to admit the truth each time another layer of fantasy is exposed, and far too quick to knock Cat down. Tom is the archetypal domineering husband. I hated him, almost as much as his daughter. Ruby is a bully, a nasty piece of work, and one seen often in the school playground. She is underhand, divisive, and clever with it. But what makes her fascinating is her ability to intimidate adults – particularly Cat.

Even the lesser characters are rounded, and cause a flurry of emotions, mostly negative. Between them, they solidify Cat’s increasing isolation. A surprising character, if one can call it that, is the backdrop. This is London. There are riots. And the added dark atmosphere pushes the pulse rate up.

Cat’s descent from her professional position to a woman who has been suspended is predictable. Perhaps I have just read too many of these situations recently, but I suppose it worked for freeing her up to fulfil her mission of getting to the truth. And I sensed a hint of formula; two set-backs followed by a step forward. It works, I get it. If there is not enough conflict, there is nothing to keep the reader hooked. But I don’t want to notice that before the protagonist gains ground each time, she fails in two different quests.

The intense, dark, racy plot left me breathless, and Cat touched me enough that she is still on my mind. I shadowed the protagonist, and sensed her emotions. And I want to know what happened next, which is rare for me.