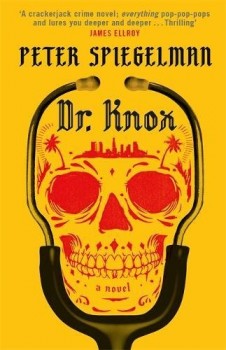 A young boy suffering an allergic reaction is brought to Dr Adam Knox’s clinic. His mother, a beaten Romanian woman, takes off, leaving Knox with a big problem.

Dr Adam Knox’s clinic is in one of the poorer sections of LA and has plenty of business, although the limited funds of his patients mean he has difficulty making the rent. To close the gap he moonlights as a no-questions-asked medical fixer through his friend Sutter, an ex-military tough guy with plenty of contacts.

Alex, a five-year old boy with a serious toxic reaction to peanuts, is easy enough to treat, but his mother disappears and various heavies soon put in an appearance. Reluctant to put the child into the system he temporarily parks the boy with a friend while he tries to locate the mother, Elena. It is some days before Elena is found and also brought in to safe keeping, and Knox’s enquiries have drawn unwanted attention.

Knox soon comes under pressure from two powerful groups. Gang leader Siggy and his Russian hoods have trafficked Elena from Romania and want her back to earn a return on their investment. Kyle, son of powerful magnate Harris Bray, is seeking to recover Alex, fruit of his relationship with Elena, and has thugs contracted through a firm called PRP to do what he needs.

For the largest part of the book it is unclear how Knox is going to overcome his problems. The people seeking Elena and Alex are ruthless, and while they spend more time promising havoc than actually making good their threats, Knox faces the choice of either giving up Elena and Alex or putting his staff at the clinic, and the clinic itself, at risk.

Peter Spiegelman’s four previous novels have featured John March, a PI with a banking background, as does Spiegelman himself. Dr Knox is a new protagonist, a doctor with a social conscience. Knox volunteered for work in Africa which ended badly: his decision to remain with a patient, contrary to instructions, led to the death of a co-worker. This back story underlines the dilemma Knox faces in the book, although the doc seems curiously reluctant to explore practical solutions for the protection of his staff.

While the book did have rather too many passages of Knox brooding over beers about his predicament, the story rolled along fairly satisfactorily with plenty of snappy dialogue and brief punchy bits of action. Spiegelman has some occasional good observations on life too. I particularly liked his rant about TV: ‘Beauty pageants for infants; ruddy men in trucker caps fighting over abandoned storage lockers; public shamings of compulsive hoarders and pre-diabetics....’

That Knox is finally able to engineer a solution is substantially due to the assistance of Sutter, who is Hawk to his Spenser, Mouse to his Easy Rawlins. Sutter is exotic in appearance and superbly equipped for a rumble against anyone, which makes for considerable entertainment. Everyone should have one.