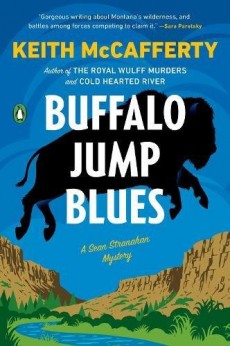 PI Sean Stranahan is hired by the beautiful Ida Evening Star to find an old flame who knows something about a small herd of bison that went over a cliff.

Sean Stranahan, artist, fishing guide and private detective, is asked by the Chippewa Nymph, one of the mermaids performing at the Trout Tails Bar and Grill, to find a boy who has been seen around, someone she lost touch with several years ago. Like Ida herself, John Running Boy is a Native American.

A stranger in the isolated mountain community on the borders of Yellowstone National Park is not as common as all that, and Stranahan makes an immediate connection with another Native American who was recently found dead from an arrow wound. His death seems to be related to the bison discovered nearby, stampeded over a cliff either by Fourth of July fireworks or deliberately, in a pishkun, a device used by hunters for millennia.

Another pair of strangers who excite Stranahan’s suspicion are Brady and Levi Karlson, brothers with an apparent interest in wildlife. Eventually, he is able to find pointers linking all these characters, although gathering actual evidence of crime proves to be difficult.

In a brief afterword, the author explains how an incident involving bison gave rise to the inspiration around which the novel is built. The remaining few thousand bison are a tiny fragment of the tens of millions that once roamed the American heartlands, and many would like to see numbers increase on public lands.

However, regulations supposedly for the protection of the livestock industry mandate that any bison found straying off Yellowstone Park are shot. McCafferty makes no bones about his support for a policy which would give creatures posing no threat to livestock, human beings or property a bit more room.

The political points are well buried, however, in a novel which is full of interest. Martha Ettinger, the local sheriff, and various locals, mostly with businesses catering to tourists – fishing guides, bait shops and eateries – have appeared in McCafferty’s previous books. Here we are introduced to a few new characters, in particular Joseph Brings the Sun, who help him on his way. These folk all come across as interesting and real, and give a believable flavour to life in upland Montana.

The location brings CJ Box to mind, whose books also feature the beauty of the wilds and the people who scrape a living there. McCafferty gives his protagonist somewhat more interaction than you normally find in Box’s work, and a touch more humour. Realistic or not, this gives a cold place bit more warmth than you might expect: a sheriff who takes the trouble to smuggle a lost bison calf back to its mother will always get my vote.