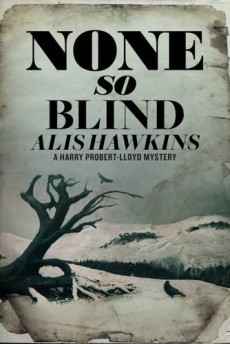 The remains of a young woman are found buried beneath tree roots. Harry Probert-Lloyd, a barrister forced home from London by encroaching blindness, has been dreading this. He knows whose bones they are and is determined to expose the guilty

None So Blind, set in West Wales in the 1850s, is so much more than a crime novel. Beautifully written, with its characters finely drawn, and fascinating in its historical detail, it is both original, disconcerting and at times both melancholy and threatening. It is set in almost  a ‘foreign’ country – at the time few spoke English – with its own social structure, and it vividly recreates the harsh realities of rural life in a society dominated by class and religion.

While London was adjusting to the comparatively new Metropolitan Police, in the beautiful Teifi Valley, where Cardigan, Carmarthen and Pembroke meet, local constables investigated no crime. Their job was to keep undesirables off the streets and suppress public disorder at the command of the local magistrates’ bench.

In 1839 and again in 1842-43, the so-called Rebecca Riots, probably Wales’ most concerted campaign of civil disobedience, and which form the background to the story, had rocked the area. Tenant farmers, crippled by tolls imposed by largely English landlords, rose at night. Mobs, with many men dressed as women, burned toll booths and occasionally attacked property or delivered their own brand of justice.

Into this unsettled scene comes Harry Probert-Lloyd, an idealistic and egalitarian young London barrister, son of a wealthy landowner and magistrate, forced to return to his roots by encroaching blindness – and by the discovery of the remains of a young woman by tree cutters. Harry suspects he knows whose bones they are, those of a farm girl he courted, fell in juvenile love with and then abandoned at his father’s insistence. He is determined to expose her killer, and hires a local clerk, John Davies, but their investigation offers more questions than answers.

Those questions centre on three names: ‘Rebecca’, the faceless mob leader, a rabble-rousing Unitarian chapel minister who preaches revolution and a childhood friend from his own past. The search for the truth proves costly with both Harry and John at risk.

Harry is an intriguing and engaging hero with secrets of his own to keep. So too is his assistant and ‘eyes’, Davies, who has also has secrets. What lifts Alis Hawkins’ book out of the ordinary is Harry’s struggle to adapt to and cope with his failing sight and his growing relationship and friendship with John Davis. She examines this both through his and his assistant’s perspective in a sympathetically handled, but frank, narrative from both men.

Although the beginning can be a little confusing, the story evens out quickly, is well researched and plotted and above all beautifully written. An atmosphere of quiet sadness for chances missed, a sense of guilt and a sort of resignation pervades this wonderful story, accentuated by the facts, metaphors and imagery built around the concept of Harry’s blindness. It will stick in your mind long after you have turned the final page.