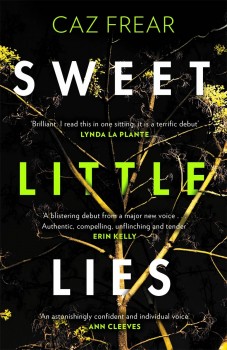 Detective Constable Cat Kinsella doesn’t look forward to her Monday afternoon sessions with a psychologist, but her boss, DCI Kate Steele, is determined to tick all the relevant boxes when it comes to her staff. Cat has to contend with the memories of a horrific crime scene – a small child found sitting with the body of her horrifically murdered mother – and that’s bound to leave scars.

But Cat already has scars to contend with, the ones left behind by the lies her father told when she was a child, lies that are soon going to come back to haunt her in a big way, when the body of another murdered woman is found, not far from the pub her father runs. So far, so coincidental. Investigations into the death of Alice Lepaine soon turn up a surprising fact, one that threatens Cat’s professional life and puts her family life – what little is left of it - under even more strain.

I wasn’t wholly sure what to expect of Sweet Little Lies. The book is packaged like a psychological thriller, which isn’t always my favourite fare, but debut author Caz Frear has produced a story that rises a long way above the usual somewhat stereotypical fare of dark family secrets that seem to be flooding the market at the moment. I gave the book a go because publisher Bonnier has a good track record and I was hoping the same would hold true here. I wasn’t disappointed.

Cat’s never forgiven her superficially charming father for lying to her when she was a child. He claimed not to have known Maryanne Doyle, a young woman who disappeared from a small village in rural Ireland, but Cat knew he was lying, and that knowledge soured their relationship beyond the point of no return. When the death of Maryanne Doyle comes back to haunt her in unexpected ways, Cat is unwilling to declare a potential conflict of interest in the investigation.

The book is told in the first person present tense, and I was quickly immersed in Cat’s suspicions and confusion as the murder team starts to dig into the victim’s background.

Caz Frear has produced a confident and accomplished debut, mixing police procedural and domestic noir to good effect and building up a cast of strong characters to carry an intriguing plot that turns into one of the best murder stories I’ve read for a long time.

Her writing voice is darkly lyrical and the story has layers within layers that gradually peel off to reveal unexpected truths in places I hadn’t even thought to look. She plays totally fair with her readers at all times, which makes each revelation even more satisfying than the last.

Sweet Little Lies proves that quality writing and strong storytelling will always combine to produce an unbeatable result. This is a book that deserves to be a resounding success.