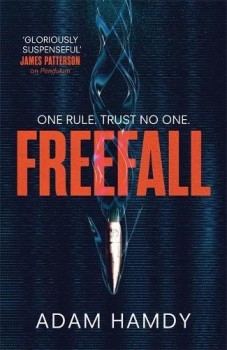 The death of a journalist triggers an investigation, but a police detective, an FBI agent and a photographer are soon caught up in a wider conspiracy.

Adam Hamdy’s first Pendulum novel was selected as a BBC Radio 2 Book Club choice. The hero of that story, John Wallace, a war photographer, survived various attempts on his life. Eight months later he once again finds himself targeted. Together with FBI agent Christine Ash and police detective Patrick Baily, both of whom joined him in the Pendulum ordeal, he must overcome impossible odds when a conspiracy linked to supporters of his nemesis is uncovered.

Hamdy follows up on the theme in Pendulum of a sinister organisation, The Foundation, who want to impose and control a pre-internet way of life on the world. With the disciples of Pendulum, however, their beliefs and methods of achieving these ambitions are even more extreme and not so clear cut.

Freefall is a more satisfying and perhaps subtle novel when it comes to plot revelation, writing style and character development. Despite its length it is easier to follow and less confusing than its predecessor – but you are advised to read Pendulum first to appreciate the subtleties.

In both books the narrative relies on all the lead protagonists suffering injuries that would cause your average law enforcer/ investigator to be laid up in intensive care for months not days or even hours before returning to the fray. It is in this durability that Hamdy may have unintentionally made his main characters too hardy and because of this trait it is hard to warm to them and have belief in their survival. There is a handful of new secondary characters introduced in Freefall but mainly Hamdy reacquaints us with the underworld characters from Pendulum who once again have their part to play, but this time at a higher cost.

Freefall explores how guilt, remorse and grief can affect the decisions and actions of an individual. It repeatedly raises questions for the heroes about who they can trust with sometimes surprising answers. Some of the underlying thoughtful and reflective aspects of the plot and the antagonist’s motives could be probably explored further without the risk of losing any of the energy of the storytelling.

It is easy to lose yourself in Freefall which is an exhausting read full of action and suspense as you would expect to find in this kind of thriller. Some of the scenes are a little exaggerated and macabre which is once again to be expected and perhaps even welcomed by some who are prepared to suspend their disbelief.