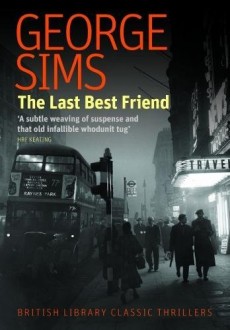 Literary dealer Ned Balfour gets a telegram from his friend Sammy Weiss imploring for help with a terrible decision. The next thing Ned hears is that Sammy is dead.

Ned Balfour is in his early forties and enjoying a holiday in Corsica with a woman young enough to be his daughter when he receives a telegram: his friend Sammy Weiss is agonising about a choice he has to make. Later that day, however, word arrives that Weiss is dead after a fall off a window ledge. Distraught, Ned returns to London. As Weiss suffered from vertigo, his death seems very odd, but with little to go on, Ned is puzzled as to how to take the matter further.

He does call on other dealers with whom Weiss had contact. One of them, Garratt, mentions a short list of words he had observed Weiss working on. These, and a photo Ned finds in a bedside book at Weiss’ house, turn out eventually to be useful clues. But his enquiries have not gone unnoticed, and he is warned off by a gang with the promise of a beating, or worse, if he does not desist.

This tale was first published in 1967 and stands up pretty well after half a century, despite clear indications of its vintage. Holidays on the Med and upmarket facilities in London were attractively exotic at the time. Balfour does pretty well for himself, is sexually rather predatory and initially seems more Bond-like than would be entirely healthy. However, he undergoes a transformation during the book: Balfour has distanced himself from his wife and two children but comes to realise that his vision of a perfect companion is a pipe-dream.

His liking for odd corners of the city and appreciation for off-beat people and places also help to make him more sympathetic. Fellow dealers, many of them of East European origin, are interesting and convincingly depicted, possibly reflecting aspects of real characters Sims met as an antiquarian book dealer himself. Similarly, Balfour’s movements around London take him to the older and less well-known parts of the city, most of which have now doubtless been transformed into something less charming.

As to the plot, we come up against the problem any author faces: introduce a large number of suspects and the reader finds it difficult to keep track, or limit the field and make the culprit all too obvious. I fear that here Sims has edged a little too far towards the latter pitfall, especially when one of the guilty parties makes a point of volunteering information which exposes his own culpability.

Despite the above, I really enjoyed this book and the quality of Sims’ writing explains why several well-known writers were admirers of his work. It remains fresh after 50 years, and the action has plenty of twists and turns to maintain interest.