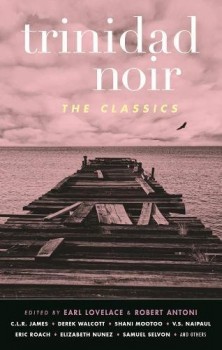 A portrait of Trinidad conveyed through 19 short stories written over the past century.

This volume from Akashic’s Noir series is introduced by Earl Lovelace, one of the contributors. He makes it clear that the initial intention to confine the book to classic 20th century work has not been adhered to, and the validity of the tag ‘noir’ is highly debateable. There can be little doubt, though, that this represents a good range of literary snapshots of Trinidad, giving clues to its distinct character.

The stories are divided into four sections, reflecting the ongoing progression of the island from a colonial past to independence, and then to the challenges of today: drugs, gangs and political corruption. The stories certainly take on a darker note as they advance in time, but throughout, the stories tell of peoples agglomerated from the far reaches of the globe and melded into a society with its own unique nature.

The earlier stories are characterised by an innocence reflection of a simpler world, perhaps. Some are distinctly humorous: The Cricket Match (Trinidadians in London promoting the myth of their natural expertise at the game), Assam’s Iron Chest (thieves getting a lesson), Hindsight (a man troubled by a third eye), and Jobell and America (a gambler’s bold attempt to gain entry to the US).

Other stories set before the turn of the millennium feature larger-than-life characters: Man-man (a madman and the challenge to the community), and Uncle Zoltan (an old rogue with a very special way of extracting loans). Some have a note of hope: Valley of Cocoa (a boy’s reaction to a city visitor), and La Divina Pastora (the mysterious gift of a saint); some the reverse: The Quiet Peasant (a man for whom the excavation of a well is beyond his capabilities), and Magretoute (the despair of an under-manager on a failing cocoa estate).

The final tale, Bonnaire Silk Cotton Tree gives a light-hearted modern twist to an encounter with a traditional forest spirit. The four preceding tales are also all written this century, but have a very different note. Songster (a famed local singer killed by interlopers), The Party (armed guards are needed to keep children safe), Ghost Story (increasing intolerance) and Dragonfly’s Tale (a woman’s search for the body of her son) all describe the ingress of factors which put humanity at risk.

The writing varies in style and includes poems: Homestead (the life of a worker of the land) and The Schooner Flight (a sailor who sails the Caribbean). There are some writers of international reputation (VS Naipul) and others less well-known. As indicated above, the noir label may apply to a few of the stories only, but this is a collection that gives a strong flavour of Trinidad, and provides a way to sample writers whom you may like to investigate further.